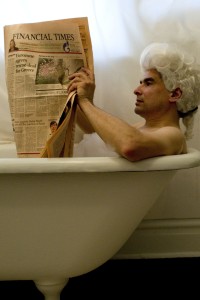 It’s a notable month for Theater Oobleck. With the remount of the company’s recent Rhino Fest contribution, “Casanova Takes a Bath,” at Prop Thtr in late May, and their current ambitious cantastoria project in conjunction with Links Hall (along with recent performances at the Hideout and the Packer Schopf Gallery), the company’s various members are performing and collaborating all over town. We spoke with two Oobleck members: David Isaacson, Oobleck founding member and the writer and performer of “Casanova,” and David Buchen, part of the brains and much of the work behind the cantastoria projects at Links and elsewhere, about the ancient forms and influences in contrast with the contemporary concerns of Oobleck’s various performances around town.

I have to admit that I missed “Casanova” at Rhino Fest. Can you talk a little about the play and how it will be different in this production?
David Isaacson: You’re not the only one! It was easy to miss. I did it along with Beau [O’Reilly of Curious Theatre Branch] and it was a weekend matinee, very easy to miss. For the handful of people who made it to the show at Rhino, this one won’t be very different, but for the rest of us… It’s a show that combines the fun of Casanova’s memoirs with commentary on our current economy. It sounds like a strange connection, but the way it works is to use episodes from the life of Casanova as mini-allegories for aspects of our current financial crisis, where the little vignettes hopefully add a layer of understanding to how we got here. Of course Casanova’s life was fun and fascinating, and I’ve gussied them up a bit, made them a little funnier, but all the vignettes are based directly on his memoirs.

I remember reading “The Nun” in college—
David Isaacson: Oh, that’s tame compared to some of it… but anyway, when I was researching that led me to these Casanova memoirs. I didn’t have high expectations, and I was surprised to find that Casanova loved to gamble. He used these gambling techniques that were very similar to Martingale betting systems that are now deeply influential in how stock-market predictions work. So we’re just taking a historical figure and contemporary politics and philosophy and putting them together in a play that’s more serious and humorous… in that way I think it’s a prototypical Oobleck work, actually, if you can call anything prototypical Oobleck.

You’re also taking part in the cantastoria festival “Banners & Cranks” at Links Hall, in a cantastoria piece entitled “6X6.” What’s the concept behind the show?
David Isaacson: Dave Buchen can speak more about this than I can, but we take the seventh-century Indian form of cantastoria—scrolled images displayed along with spoken or sung narration—but six actors improvise along with a  series of six images we’ve never seen before, so we’ll be interpreting images we’ve seen for the first time… It’s a kind of mashup of improv and cantastoria. The artists range from Clare Dolan [Buchen’s collaborator in designing “Banners & Cranks” and longtime artistic associate with Bread and Puppet Theater] to Blair Thomas, Great Small Works and Bread and Puppet Theater. There will also be a combination of improvisations, including a jazz singer and a jazz cellist… but of course we have no idea what these performances will look like.

David Isaacson explained a lot about “6X6,” but I’d love to hear just a little more about how you came to the idea of the festival and the show.
Dave Buchen: Like almost everyone else in the United States, I learned about cantastoria from Bread and Puppet, who have been using the form for awhile… it’s a great presentational form, and I think for me the Oobleck aesthetic of directly engaging the audience rather than trying to create an illusion is a nice approach to the form. In my own visual arts work I do bookmaking, so I thought, “Here’s a way to do bookmaking and theater at the same time.”