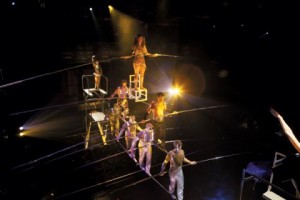 The story of Hephaestus’ rejection from Mount Olympus and subsequent drama with the gods is underdeveloped at best in this production,  and sometimes incoherent—there’s often little connection between the narrated story (so simplistic it mostly feels like children’s theater) and often bizarre physical theater that less illustrates the story than interrupts it with some spectacle. However (and it’s a big however), this is easily some of the best physical theater and circus performance you’ll see in an intimate stage in Chicago. Lookingglass has enlisted a ridiculously impressive lineup who give virtuoso, seemingly impossible performances—culminating in a seven-person pyramid on the high wire that’s both terrifying and dazzling. (Monica Westin)