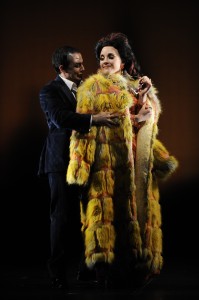 The celebrated music director of a major opera company once admitted to me that he thought that Mozart “invented” opera as we know it. “Never mind all of that Monteverdi nonsense,” he pontificated, the works of whom he admitted he had never seen performed, and as if that was all there was before Mozart. As it turns out, we all have a lot to learn.

How soon we forget: although Francesco Cavalli’s “Jason” was the most performed opera of the seventeenth century, it is only now being given its first professional performance in Chicago courtesy of Chicago Opera Theater more than three-and-a-half centuries after its 1649 Venetian premiere.

No, “Jason” is not quite the lost gem on the level of “Moses in Egypt,” the rare Rossini work that COT also recently resurrected. But for those who have the slightest interest in the history of musical theater and in the transition from the Renaissance to the early Baroque period—to say nothing of really great singing—“Jason” is a must-see.

When Rene Jacobs made the first full recording of the piece more than two decades ago, it tested then state-of-the-art length limits of three overstuffed compact discs, and even that was with a number of cuts. The COT performance has whittled the score down to the manageable point where “Jason” can be experienced within three hours, including a single intermission.

Cavalli’s music is invigorating and there are constant new discoveries and delights to be savored at every turn. In terms of dramaturgy—especially for those of us expecting any connection to the storyline contained in the Greek myth “Jason and the Golden Fleece” that the opera is ever-so-loosely based on—a contemporary audience is as cast adrift as the Argonauts themselves on their long sea voyage, which is only alluded to here in passing.

This bizarre riff on the Jason story, however, tells us loads about the audiences of seventeenth-century Venice and, in its own way, is no further removed from the original myth than the hugely popular film version of the Baby Boomer era that chose to emphasize Jason’s adventures and cut out the Medea affair virtually altogether. In the operatic version, however, it is the adventures that are cut and we get not one Medea, but two, in that Jason is married and the father of twins, but is cheating with a mysterious figure who will not reveal her face and who also has had a pair of twins with Jason.

More bizarrely, we are asked to believe that Medea is the one who hides her face and that the two agree to square off in a cat fight to the death (never shown, sorry) as to who gets Jason. Along the way we spend more time with scheming servants than we do the lead characters, one of them a hunchback with a speech impediment whose stuttering syllables are musicalized and a huge source of comic relief. (Ah, political correctness during the Renaissance.)

That the plot is endurable at all is in no small part due to a transposition to the James Bond film era, circa 1960s, where Jason is a Connery-style Bond, complete with tux and champagne. Medea is cast in the Jackie O look of the time, thick hair, large sunglasses and the Golden Fleece made into a full-length coat.  You could argue that with its dysfunctional families ready to scheme and murder each other at the drop of a hat that the gangster world of “The Godfather” or “The Sopranos” might have been a more apt updating.  Even so, the choice does make for some colorful sets and costumes even if the action of the opera has little to do with Bond, except that Jason and Bond both are heroes of vastly different eras and values, neither one of which has anything to do with seventeenth-century Venice, the real world of the proceedings. 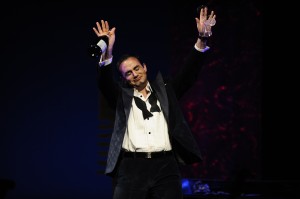 Countertenors are a rare breed, as we know, and the handful of folks who have resurrected this art form in an effective manner that do not sound like eighteenth-century versions of an unamplified Frankie Valli are even more rare. Add Argentine countertenor Franco Fagioli, making his North American debut with these performances as Jason himself, to that list. In fact, you could rewrite the list and put Fagioli at the head of it. His is a sound of considerable muscularity and masculinity, a countertenor sound with genuine heft and presence. It was hard not to be struck by the fact that a superstar countertenor who sang last year in the Harris—the same theater as this production—barely carried in this theater, and can at times be virtually inaudible at a cavernous house such as Lyric. Fagioli carried wonderfully well here, with a clarity and transparency that electrified at every level of his range, from his gorgeous lower range up through his full-bodied high notes, all of which make up a distinctive vocal instrument. He is a real find, and COT general director Brian Dickie is to be vastly congratulated for bringing him here at the dawn of what is obviously to be a huge career.

No less important are the women sharing the spotlight with Jason, mezzo soprano Sasha Cooke as Medea and soprano Grazia Doronzio as his wife Isifile and happily, the singing all the way around is stunning. The blend of both voices with Fagioli in key scenes were immensely effective.

The decision to employ Baroque Band, the Chicago-based period instrument ensemble that British violinist Garry Clarke founded here in 2007, was an inspired one. There were no winds or sackbuts but the strings of the ensemble—including Clarke himself—were in splendid form and were augmented by two therebos, organ and two harpsichords, one played by Scottish conductor and early music specialist Christian Curnyn, who did a spectacular job with his continuo playing as well as keeping the action moving ahead in a spirited manner.  (Dennis Polkow)