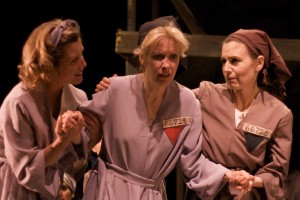 It does Provision Theater no disservice, I think, to state that any judgement of “The Hiding Place,” the original adaptation of Corrie ten Boom’s autobiography that closes the company’s current season, will largely depend on one’s own identification with spirituality and religion. Though for too much of the play’s almost three hours I felt like I was at church, I still found myself sympathizing with the plight and struggles of the ten Boom family as they tirelessly fought the forces of Nazi oppression, and worked to do right by man and God. A Christian family in Holland, the ten Booms nevertheless find themselves an integral part of the underground during WWII, turning their home into a hiding place for Jews on the run. Adaptor/director Tim Gregory has cast a talented group of actors, led by Lia Mortensen as Corrie ten Boom, who find nuance and levity in their roles. And the production design, particularly the set by Inseung Park and the lighting by Josh Wessecker, is crafted so well as to bear some strikingly resonant symbolisms. Yet Gregory’s adaptation fails to make you forget you’re watching a history play. It’s no surprise, really, when after much determination the family is caught by the Nazis and sent to prison, and again it’s no surprise when after much suffering Corrie is set free. Gregory finds hills and valleys in his narrative, but it’s not until the second act, when Corrie and her sister begin to doubt, that the production begins to investigate deeper planes of story and meaning. Creationists will cite the mechanical watch as a metaphor for Intelligent Design, their explanation for a God-created universe. The ten Boom family, whose trade is, you guessed it, watch repair, also believes that God’s plan is revealed through time. For the more religious, perhaps this is enough. For the rest, take meaning in this exchange: When a fellow prisoner has smuggled in a Bible for Corrie, Corrie says, “God, you are so good!” Offended, the other woman fires back: “Hey! What about me?!” (Neal Ryan Shaw)