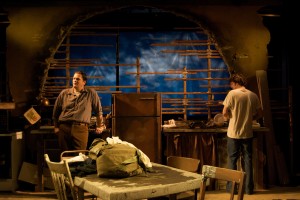 A strong, stylish adaptation of the Sam Shepard family tragedy about a family wrestling to hold onto their rundown farm and dilapidated house. The family is one that’s deeply embedded in our shared literary memory, and we’ve heard the story many times before: A dreaming lush of a father, broken mother looking for a way out and two children destined to stay stuck in the cycle of marginal poverty (despite asserting that they’re not part of the “starving class”) get taken down by con artists and opportunistic sleazebags who are American archetypes as well. Actors struggle valiantly against the familiarity by approaching it with a bit too much exertion, if anything; but they can’t always quite shake off the play’s fairly predictable and strangely patronizing writing. Director Kyra Lewandowski handily keeps the action as interesting as possible, with a hyper-real naturalism (characters microwave real bacon and piss in the corner of the set) that creates a strongly visceral, if not emotional, depth to the show. The only thing that limits the show is the play itself, and you can’t help but wonder if this decade’s housing crisis actually justifies a remount of Shepard’s story. (Monica Westin)