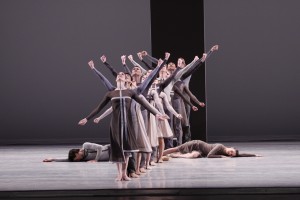 With such regular fare as “The Nutcracker” and “Cinderella,” it’s easy to forget that the Joffrey has built its reputation as a contemporary ballet company, one likely to lead audiences into reconsideration of the increasingly flimsy boundaries between dance’s genres. With “Eclectica,” a three-piece repertory now at the Auditorium, we can report that the conversation between ballet and contemporary dance is healthier than ever at Joffrey.

Opener “Reflections” is signature Joffrey work. This 40-year-old creation of co-founder Gerald Arpino (which, in a nice symmetry, had its world premiere in 1971 at this very same theater, though the company was then decades away from moving to Chicago) is stripped-down, simple beauty—dance at its essence. Just a cello and piano, playing Tchaikovsky’s beautiful “Variations on a Rococo Theme” for Violinocello and Orchestra, op. 33, and dancers conducting a master lesson in why ballet is such a beautiful art form.

But young choreographer Jessica Lang’s world premiere, “Crossed,” is the showstopper. Her set, simple yet creative: a long horizontal beam, and another vertical, sometimes making a a cross, or maybe just  a visual  divider. Timeless yet contemporary, an achievement matched in Tamara Cobus’ costumes,  and especially in the choreography, as much contemporary as ballet. It’s a feast for the eyes, with visual motifs and tableaux boldly quoting Christian iconography. Is this religious? Is this a contemporary ballet Passion Play? It can be, if you want. Or it can be a masterful play of symbols that pervade our culture and our classical arts. The shirtless dancer, walking in sync to the vertical beam, becomes Christ carrying his cross. Joined by four more male dancers, now it’s Christ and his disciples during Holy Week; they carefree, he contemplative, alone. The music—the religious choral work of Mozart, Handel and des Prez—is hauntingly beautiful throughout. Until the final movement, with the full cast bathed in light, with Mozart’s “Sancte Spiritus” raining “Hallelujahs” and evoking the Resurrection in an explosion of joy. What Lang has accomplished, brashly working with what was once the basis for nearly all Western art but rarely ever so in the last century, while making it both purely contemporary and eternal, is breathtaking. Standing ovations are critics’ least-favorite part of any show, so freely proffered and so rarely earned. Here, the critics led the charge out of the seats.

It’s a hard act to follow, but the venerable James Kudelka’s world-premiere “Pretty BALLET” manages to serve as a subtle contemplation of ballet’s role in contemporary dance. Beautiful in its own right, ample tulle and bright red shoes validate the name of the piece, as do a motif of a dancer holding a ballerina overhead like an icon. The movements are balletic—lots of men leaping leaping leaping impressively—and yet, mixed in freely with movements clearly of our time, and not from some canon. Cerebral yet joyous, it helps bring the spirits sent soaring by “Crossed” gently back to earth. (Brian Hieggelke)