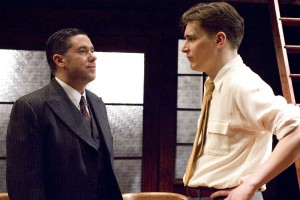 Writer Aaron Sorkin (of “The West Wing” fame) takes up the history of television’s invention, a story filled with espionage, macabre corporate politics and visionary prophets of media’s future. When immigrant-turned-media-mogul David Sarnoff  purloins the invention from Philo Farnsworth, a college-dropout boy genius from the boondocks in Idaho, the conflict is less between Sarnoff and Farnsworth than it is between Farnsworth’s idealism of information sharing and collaboration versus Sarnoff’s corporate interest in intellectual property, and Sarnoff’s own losing battle against advertising in mass media. Both, of course, fail in their idealistic fights, but the story of how they fail, in the context of early to mid-twentieth-century history, is mostly exciting. The writing does occasionally get in the way of the story, with a bit too much speechifying and needless directions to the audience to pay attention (“This will be important!” “Something remarkable is about to happen!”). But the direction easily overcomes any inertness in writing; director Nick Bowling adeptly maneuvers a large ensemble in and out of the stylish set’s two entrances and expertly enlivens what in other hands might feel like a dense history lesson. And Sorkin ultimately succeeds in writing a story that’s profoundly important to a world currently adjusting to the internet: when Sarnoff argues that television is going to “end ignorance and misunderstanding… by pointing a camera at it” we can laugh a bit uneasily, but when we see Farnsworth destroyed by his impulse to share information freely and Sarnoff realizing that once your media excels at bringing consumers to advertisers “it’s hard to be good at anything else,” the impact of the play’s relevance hits hard. (Monica Westin)