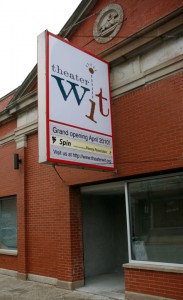 “I want this to be the nicest storefront theater in town, ” Theater Wit artistic director Jeremy Wechsler recently told the Chicago Tribune’s Chris Jones. After taking a look around last week through the remodeled three-theater complex that used to house the Bailiwick, I’d say Wechsler has succeeded, and then some.

The old Bailiwick building had been something of a dump for years. We’re used to that in Chicago. Storefront theaters aren’t meant to be especially comfortable or designed with acoustics in mind. I wouldn’t say that’s part of the charm, but it certainly gives fringe theater a grittiness that feels distinctively Chicago.

Wechsler has gone in an entirely different direction, and I think it’s a real boon to the theater landscape as a whole. (In the fall, Shattered Globe, Stage Left and BoHo will also take up residence.)  Mike Daisey recently railed against theaters that he feels are more concerned with building physical structures than focusing on the art that goes on inside—but plays need to be performed somewhere, and this city is lacking in mid-sized, moderately priced venues to fill the void between rough-and-ready storefronts and pricey downtown real estate. The Theater Wit space should go a long way to remedy that.

The $1.3 million complex is appropriately modest, but clean and comfortable. It resembles in some ways a scaled-down version of the Steppenwolf. There’s air-conditioning and a decent amount of leg-room—two things usually lacking on the storefront scene.  There are no obstructed views or obvious fire hazards. It feels like a real theater, as opposed to something retrofitted and jury-rigged—and yet it still has a quasi-industrial ambiance, with exposed duct-work and brick walls. In short, it is a terrific place to see a show. 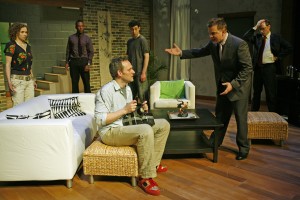 The building’s inaugural production?  Not so good.  (So maybe Daisey has a point.)

Written by Penny Penniston (who is married to Wechsler and probably best known for her physics-themed rom-com for the stage called “now then again”), “Spin” feels very much like a certain kind of play—“The Little Dog Laughed” comes to mind—that tends to get a slick, off-Broadway production. It’s easy on the eyes and easy on the ears, but there’s not much to recommend it otherwise.

I’m not sure what Penniston is after in this satire about advertising and ways in which we sell our souls in the hopes of finding happiness, or rather “happiness.” The narrative setup—a disillusioned ad man (Coburn Goss) takes up with a teenage runaway (Alice Wedoff), while working on a beer campaign—doesn’t coalesce into any sort of larger point.

That said, the script is packed with witty putdowns, and Wechsler’s cast has a fine time with all of it. “It looks like a Pier 1 exploded in here,” someone says of a well-appointed yuppie condo. Lance Baker is droll and subtle as a blinking stiff in a suit, and Joe Foust finds just the right amount of loathsomeness in an ad exec who is one T-shirt away from a full-on Ed Hardy moment. (Nina Metz)