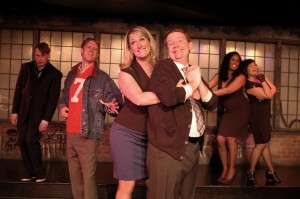 If there is one reason to see Second City’s thirty-fourth revue on the e.t.c. stage, his name is Brendan Jennings, one of the newer writer-performers in the cast who makes his presence known with a good-natured mania that is impossible to ignore.

Of the many talents who’ve worked on Second City’s stages in recent years, Jennings seems the most suited for “Saturday Night Live.” Whether that’s in his future is another matter, but Jennings has a lot of qualities that work well on TV. There’s an inherent sweetness to his comedy and, like Will Ferrell, he has enough personal charisma to play it broad—almost too broad—and still keep it interesting.

He doesn’t display much versatility, but he has the loose physicality of a frat-boy party animal, and a real knack for the comedy of humiliation. I will not soon forget his primal scream of rage as he stood dressed in a pair of Daisy Dukes hiked up his butt crack, wailing about his miserable life. Jennings screams like a girl, a trait that is both hilarious and a clever bit of comedy; you are always on his side, no matter how ridiculous and ass-cheek-exposing that side may be.

Jennings is just one of three men in the cast—which includes returning veteran Tom Flanigan and new addition Tim Baltz—and standing together, they are a Richie Cunningham sight gag: pale-faced, fair-haired dudes fresh from the White Guy Convention.

That kind of similarity might seem counterintuitive, yet each man is able to distinguish himself. Baltz has a deceptively straight-laced exterior that can give way to something far more bizarre, but it is really Flanigan—along with fellow veteran Christina Anthony—who seems most confident when it comes to building a character.

Flanigan has come a long way in that regard. His Johnny Crooner character—a self-proclaimed Tea Party pooper in a cardigan and porkpie hat—works precisely because Flanigan plays him with a Southern lilt and an impish smile.

As an actor, Flanigan has reached a point where he can simply throw on some black lipstick and a pout, and suddenly, without uttering a single line of dialogue, he’s that brooding Goth guy from high school—incidentally, the most fully realized character of the show, despite his brief appearance.

That’s because under the direction of Billy Bungeroth (a Second City first-timer), the comedy is situational rather than character-based.  I’m guessing some of that is Jennings’ influence.  He is a cherubic force of nature, and it can’t help but rub off on his fellow cast members. There’s a palpable zaniness to this cast that I found hugely appealing.

And the first third of the show is genuinely buoyed by this electricity. The brick warehouse set from last year is still up, but now it is strewn with graffiti in a nod to just how low the economy has sunk—which inspires the cast to sing about the good old days when “people shit gold.” There is the requisite (but still funny) Olive Garden joke: “Like Italy, if it sucked.”

The women of the cast (Anthony and fellow veteran Beth Melewski, plus newcomer Mary Sohn) all bring a strong, don’t-fuck-with-me energy to the proceedings, striding on stage in shiny black leggings that show off every bulge and curve to sing about their Rubenesque physiques: “My back be hurtin’/my bra too tight/my hips be shakin’ left to right.”

Instead of the usual piano riffs between scenes, Bungeroth and musical director Jesse Case have incorporated a thundering tom-tom drum. It gives a real sense of momentum, but the concept isn’t carried throughout the show, which is symptomatic, I think, of a larger problem.  Ideas are introduced, but not really built upon. There’s an awful lot of  back-to-back mediocre material (a spoken-word tutorial; a teacher-student love affair) and the show never really finds its footing.

Case in point would be a scene between Flanigan and Anthony, which aims to upend racial stereotypes—and audience expectations about precisely this type of sketch. Anthony sells the hell out of it, and it’s a compelling premise, but ultimately they’re not quite sure what to do with it. (Nina Metz)