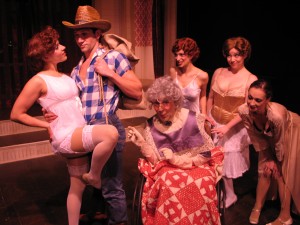 Circle Theatre is kicking its heels up, literally, to celebrate its twenty-fifth anniversary with a no-holds-barred production of that odd duck of a musical, “The Best Little Whorehouse in Texas.” Based on a true incident uncovered in a 1974 Playboy magazine article, the back story concerns a century-old house of ill repute known as the “Chicken Ranch” outside of a small Texas town that had become a larger-than-life, unspoken multi-generational Texas tradition that ultimately succumbed to would-be do-gooders out to expose the truth of what went on there.

Given the increasing conservatism that was sweeping the country in the late 1970s that ultimately led to the election of Ronald Reagan and increasing exposure for larger-than-life televangelism that was as glitzy and painted up with makeup and fake hair as a real-life whorehouse (even the use of that word in a show title in 1978 was controversial and nearly cost the show its backers), the original became a wry commentary on the times that became lost when it became a hugely popular feature-film vehicle four years later for Dolly Parton and Burt Reynolds.

The Circle Theatre production goes blessedly back to basics and leaves out the Dolly Parton songs from the movie which served to grind the action to a standstill, and restores the entire original Broadway score—such as it is—by Carol Hall, including the added song “A Friend to Me” which Hill wrote for Ann-Margret for a 2001 revival of the show.

Granted, much of what the show is satirizing is so time-sensitive that much of its original punch has been lost after more than three decades, but the hypocrisy portrayed could be right out of today’s headlines. And given the energy and enthusiasm that director and choreographer Kevin Bellie and his fine cast have for this material, this becomes a fun experience, though with its language and situations—including compromising positions and unclad cast members, this is hardly a family musical.  (Dennis Polkow)