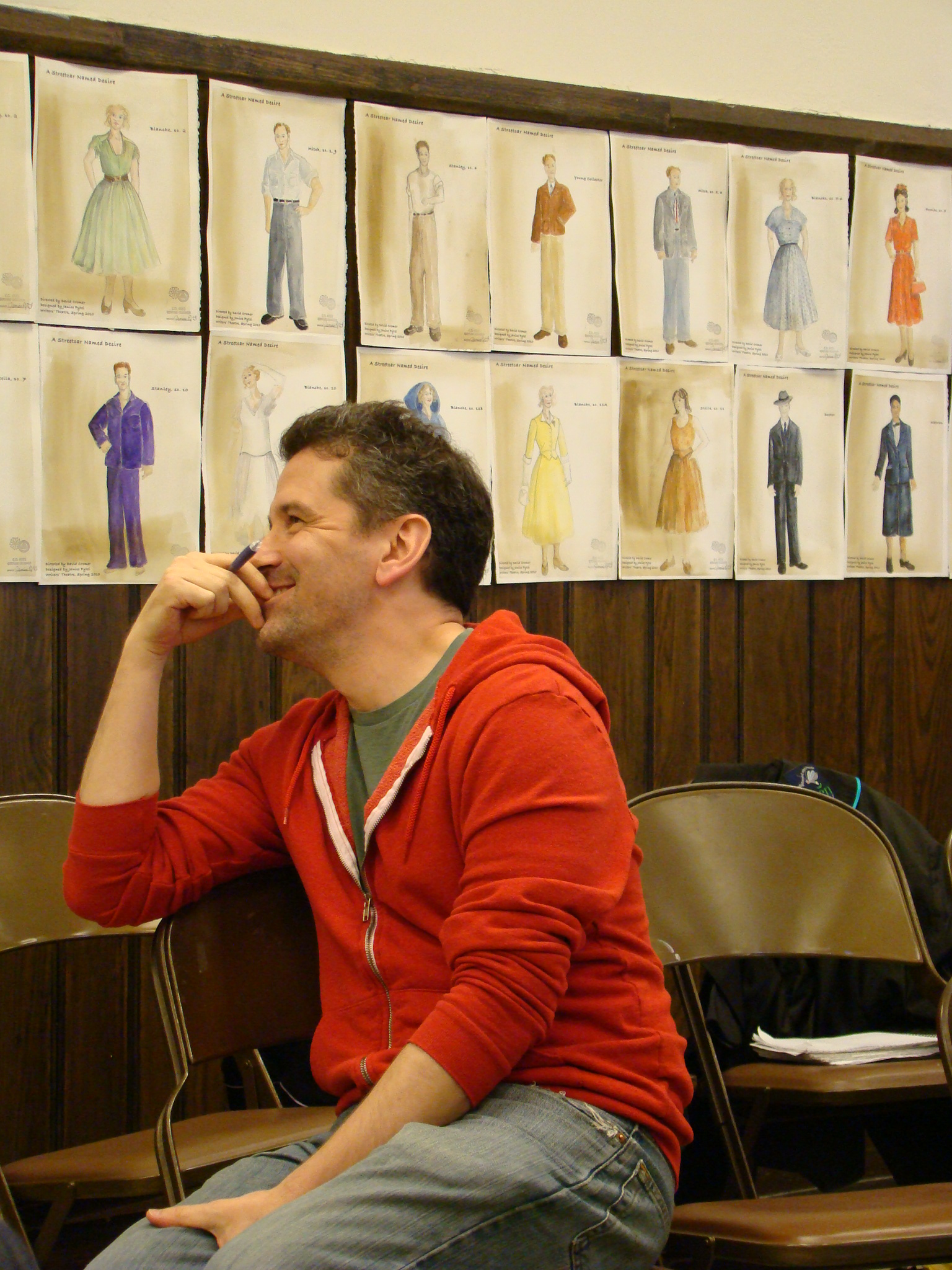 “Angels in America, Part I”: An angel appears accompanied by a flash of light so bright you have to block your eyes. An aural cluster of classical compositions (Stravinsky, Verdi) blasts while the incessant sound of fluttering wings catches up to your heartbeat, an experience akin to the THX Dolby Digital surround sound in a movie theater that vibrates from up and under your chair and into your body.

“Adding Machine”: A visual journey into an expressionistic world of chiaroscuro lighting effects and dark sensibilities.

“Picnic”: You enter the theater and are enveloped in a world of live tree branches and gorgeous green grass.

“Our Town”: A fugue of smells—the aroma of coffee percolating and bacon sizzling—from a kitchen so real you could move in yesterday.

These are David Cromer moments.

David Cromer is the 45-year old former Chicago actor/director and current New York directorial shining star beloved by both cities, a man whose enormous talent has brought him national recognition—and brief notoriety (for the Broadway failure “Brighton Beach Memoirs”)—thanks largely to a triumvirate of Off-Broadway successes that includes 2005’s “Orson’s Shadow,” 2008’s “Adding Machine” and last year’s “Our Town” (all of which originated in Chicago). “Adding Machine” and “Our Town” were not only their season’s Outstanding Off-Broadway Musical and Play, respectively, but they garnered Cromer awards for Outstanding Off-Broadway Director two years in a row. The Wall Street Journal called him a “genius,” he has been profiled in The New York Times Magazine, and most recently received critical acclaim, from The New Yorker to Time Magazine, for his Lincoln Center Theater staging of Australian playwright Andrew Bovell’s “When the Rain Stops Falling.” David Cromer is hot. And now, David Cromer is back. 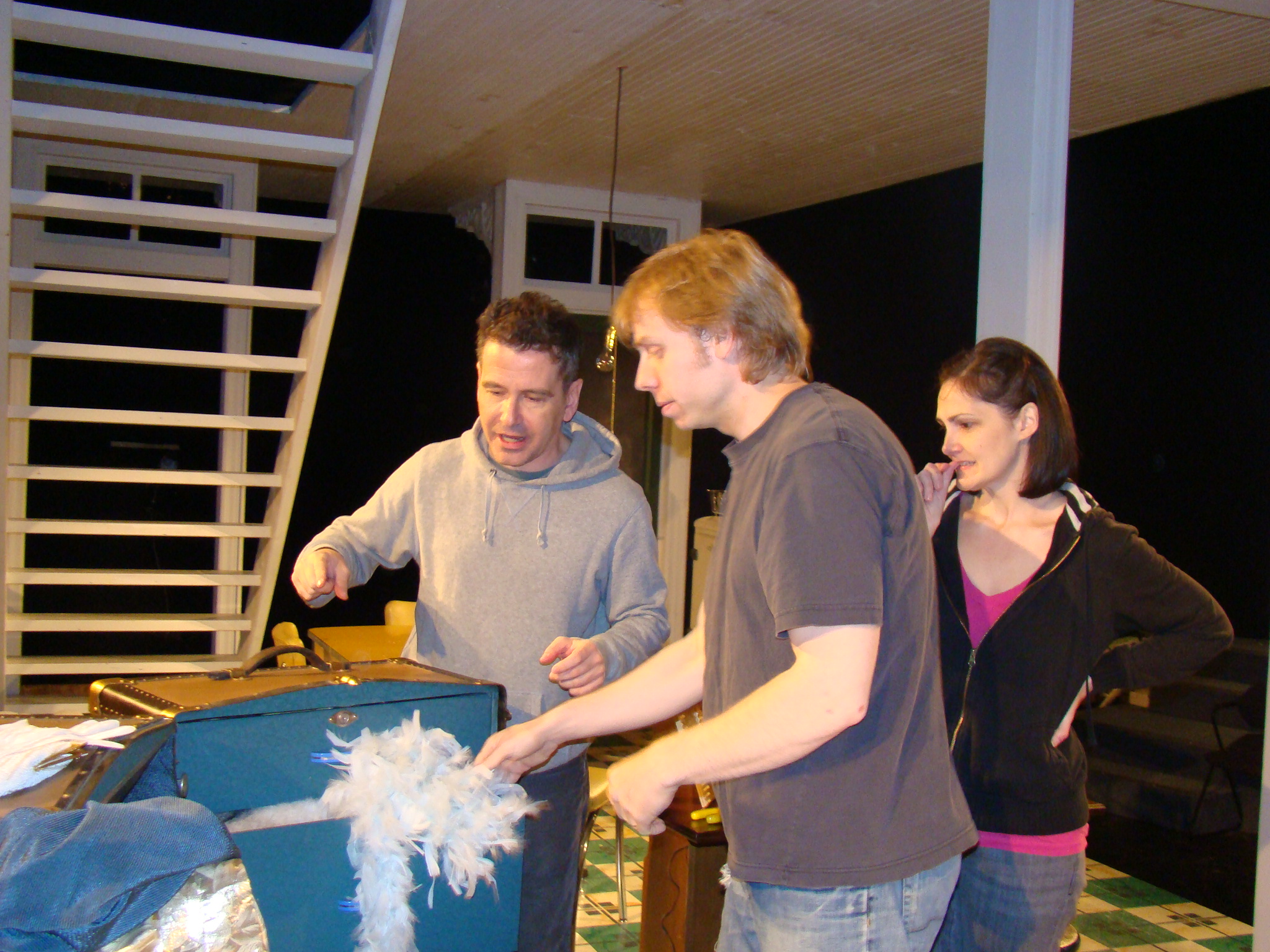 The temperature has plunged into the forties on a very cold day in late April in the bucolic North Shore suburb of Glencoe, Illinois. In the basement of the Glencoe Union Church, the rehearsal space of Writers’ Theatre, Cromer is working on his upcoming revival of Tennessee Williams’ “A Streetcar Named Desire.” The production stars Chicago actress (and Cromer’s longtime friend) Natasha Lowe in the role of Blanche and actor Matt Hawkins as Stanley. There’s a good mix of serious and playful experimentation in the room, and Cromer’s DVD-worthy running commentary includes articulations on his own challenges during the process (“I don’t know where I’m getting here, so hang on”; “I’m sort of just poking at this idea, so bear with me”). It’s a safe environment, and one that allows his actors to be forthcoming with their own struggles.

“I don’t know where the switch is,” says Hawkins, trying to land three distinct beats within a scene in which Lowe’s character is trying to navigate a path around Hawkins’ Stanley. The scene brims with sexual tension. Cromer, sporting blue corduroys, black Pumas and a nondescript heather-grey hooded sweatshirt, runs over to Hawkins, glances at the actor’s script and breaks down Stanley’s lines with a crude argot: “It’s like Stanley is thinking…ya wanna get by me, then fucking get by me…oh wait, you think I wanna fuck you…wait, maybe I do wanna fuck you.” Hawkins then tries the scene and nails it. Cromer’s R-rated transliteration of Williams’ Pulitzer Prize-winning dialogue is unexpected yet effective (“It’s like she’s saying…after the death of my husband yeah I fucked a lot of strangers, my youth was gone, all this fuckin’ shit happened.”), so much so that at one point production stage manager David Castellanos dramatically fans himself with a prop and locks eyes with assistant Becky Pechter as if to say, “Oy, vey,” especially when Cromer, fight choreographer David Woolley and Woolley’s assistant, Charlie Cascino, a woman, begin working on how to roughhouse and essentially “rape” Blanche, a piece of elaborate choreography they ultimately dub “Dances with Scissors” thanks to a prop which figures prominently into the scene. “It’s not like Shelley Duvall with the scissors going ‘arrrggghh’,” Cromer says to Woolley. Woolley cracks up, and without missing a beat Cromer declares, “It’s a good analogy. I’m proud of it.” Cromer then asks, in all seriousness, “Can we blunt the edges of the scissors…,” and then very sarcastically, “…So I can rob this scene further of its emotional power?” The director’s head whips over to the reporter in the room, and while wagging his finger shouts, “Don’t write that down. He’s a mole for the Tennessee Williams’ estate!” The room explodes with laughter.

Later that evening, sitting in the Chicago Boystown bar Sidetracks, a bar Cromer likes very much, especially on Showtunes Monday night, Cromer sets down his Jameson Sweet and picks up his shiny iPhone to look up the definitions to words that have often been used to describe him. “Curmudgeon… ‘a bad-tempered, difficult, cantankerous person’…that’s not me,” he mutters softly as Lady Gaga’s “Telephone” pulsates in the background. “Sardonic… ‘characterized by bitter or scornful derision; mocking, cynical, sneering’…maybe that’s me a little bit,” he says while flashing a trademark grin that looks like a cross between a cocky sneer and a genuine smile. Self-conscious and unflinchingly honest in his articulation of himself, Cromer’s preoccupation with his public persona outside of the rehearsal room (and over which he has no control) is especially understandable tonight; he’s recently had to participate in an interview—something he doesn’t like to do—in which he had to address his local reputation for being a “difficult” collaborator, something he really doesn’t like, and something that was nowhere to be found that afternoon in rehearsal.

Welcome to the dichotomy that is David Cromer.

“He is a curmudgeon, although sardonic is probably best. But he’s not only that. He’s deeply sentimental, and yet as a director he hates sentimentality.” Actress and Remy Bumppo artistic associate Annabel Armour, who worked with Cromer on “Angels” in 1997 but remembers working with the director as far back as 1990, is trying to pin him down, something that’s not easy to do. “He has this ability to have a healthy ego, and yet at the same time be self-effacing. To codify him is not applicable.”

Another thing that seems hard for people to do when it comes to David Cromer is pinpoint the exact moment they met him. Armour thinks it was back when Cromer was “…a kid of 23 or something who had no edit, would say inappropriate things, piss people off and then say, ‘Shit, I’m sorry.’ When I first met him, I thought, you just don’t take him out into society,” she says with a big laugh. Lowe (whom Cromer affectionately refers to as “Tash” in rehearsal) had heard about him while she was still in high school, at which point Cromer would have already been at Columbia College, the institution from which he never graduated despite teaching there part-time for fifteen years. (“It’s the way I’ve always been about anything, I cherry pick what I want to learn,” comments Cromer.) Northlight Theatre artistic director BJ Jones, who years later would hire Cromer to direct the play “Blue/Orange” at Northlight in 2004, recalls a “smart and sharp Columbia kid” who made him “laugh his ass off” over lunch at Columbia twenty years earlier. For Hypocrites artistic director Sean Graney it was 2001, when a friend was acting in Cromer’s production of Christopher Durang’s “Betty’s Summer Vacation” for the now defunct RoadWorks Productions. Or was it as late as 2005 in the Columbia faculty lounge? Either way, Graney says, “I’m sure it was underwhelming and we were just trashed.” Alcohol figures into a few other significant meetings. Actor Marc Grapey, who officially met Cromer when Grapey hired him to be his co-director on the Famous Door Theatre (also now defunct) productions of John Irving’s “Cider House Rules, Parts I and II,” and shares with his now-good-friend “this cynical, slightly optimistic, kind-of hopeful, negative worldview,” remembers getting “bombed” with Cromer at Wishbone restaurant. And New York-based producer Scott Morfee, who has presented all of Cromer’s Off-Broadway triumphs at his Barrow Street Theatre in New York City, met him socially at the Four Moons tavern in Roscoe Village, a watering hole for Chicago theater people, through actor and writer Tracy Letts. With the exception of Morfee, everyone distinctly remembers Cromer always being broke.