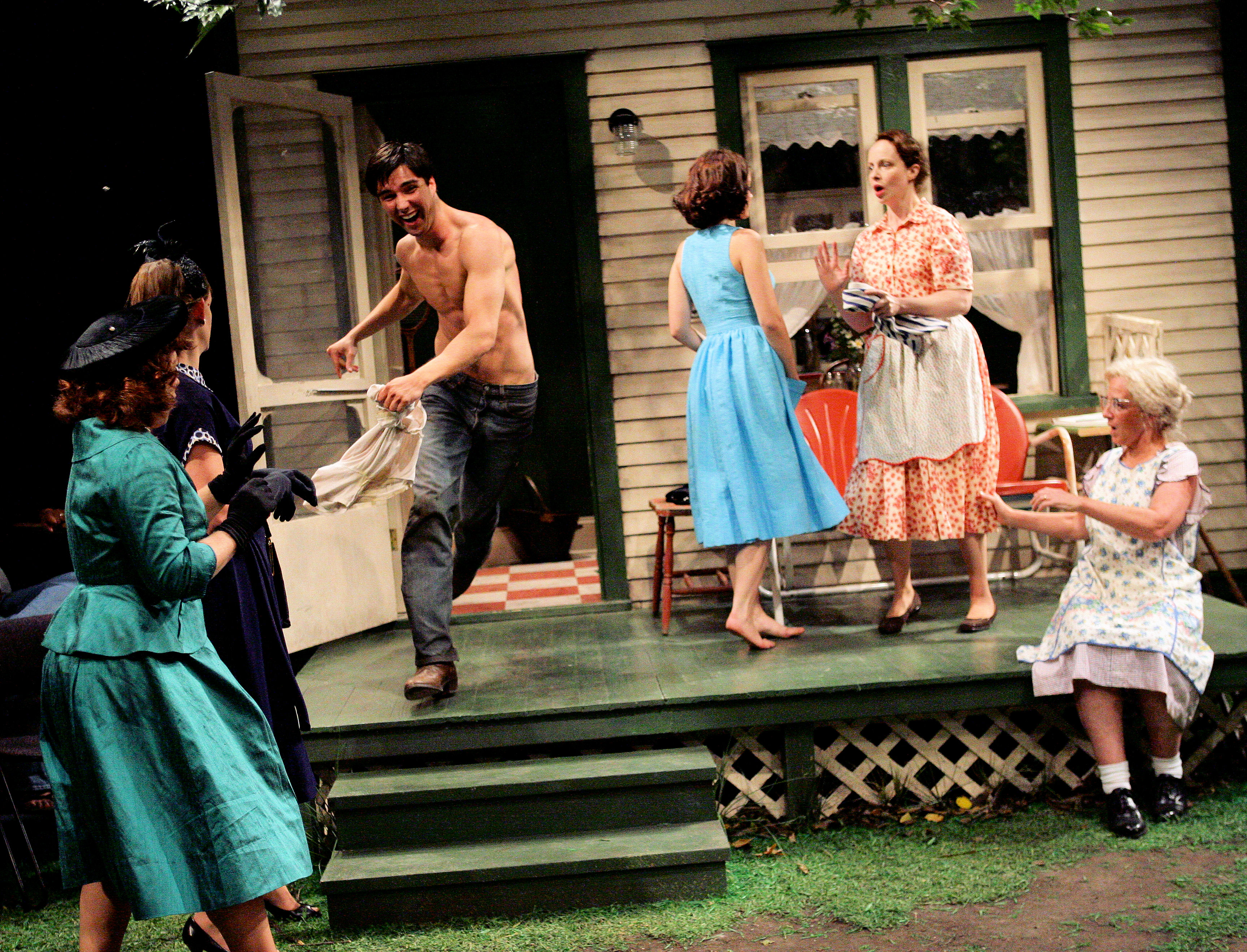 Casting is everything for David Cromer. According to Halberstam, the director hires actors who have the characters they are about to inhabit within their emotional vocabulary, allowing actors to “slip sideways into the role” and just exist—not act—in the richly detailed world that Cromer creates for his productions. “A paper-thin shell between actor and performer,” says Halberstam, is what Cromer strives for when casting.

In the rehearsal room, Cromer’s capacity for textual insight is matched only by his need for visual clarity. He never remains still while working, walking around and repositioning himself in different places from which he observes his actors. He sits on the edge of a chair one moment, stands behind a production table the next. Sometimes he’s within a few feet of his actors, other times he’s halfway across the world in the back of the rehearsal room. Most telling is when he sits in a nearby seat and takes in the scene as would an audience member. Perhaps this is why audiences find themselves so seamlessly and effortlessly being placed in Cromer’s worlds and in the shoes of their characters. “David seeks to find real life in his productions,” explains Halberstam, “what would this be like if it were real.” And indeed, it’s easy to imagine Cromer standing back, feeling a scene and its characters very deeply, and doing all he can—textually, visually, psychologically, emotionally—to communicate this to an audience. It also explains Cromer’s relentless attention to persnickety detail.

Indeed, Cromer spends a good ten minutes conferring with “Streetcar” costume designer Janice Pytel on Blanche’s party dress. As Lowe stands in costume, while an army of dressers and production assistants hover around like satellites in the cramped dressing room, Pytel and Cromer discuss the merits of the addition or rearrangement of a ribbon on the dress. Everyone stands silent and still while Cromer circles around Lowe and visualizes the dress from every conceivable angle. By this point, Cromer has slipped off his flip-flops and is walking around barefoot. Pytel meticulously positions and repositions the small piece of fabric—sometimes to the subtlest of degrees—and offers a few thoughts. When Cromer finally decides on what he wants (or what he thinks he wants for the time being), he thanks everyone, slips his flip-flops back on, and is off to deal with whatever next needs dealing with.

“Oh, you noticed that a button is missing off a sleeve in act three?” Scott Morfee is discussing the specificity of Cromer’s vision. “Yes, he does that and I tease him about it all the time, but you know, I’m very glad he notices that the button is missing. We can get it fixed. This is not a problem to me.” Actors acknowledge the very tight parameters of how Cromer wants his shows to look, sound and come across. “I sometimes think he would like as tight control over his actors as he does his designers, but performances change. I think a show on closing night has precious little to do with a show on opening night,” Grapey says, “but that stems from his supreme confidence in himself as a director, not from any insecurities. As an actor, he doesn’t tell you what you necessarily want to hear. I can see how that could be a problem for some.” Cromer himself admits that he’s been both “overjoyed and furious” upon returning to a long-running show and seeing how it has developed, acting-wise. Grapey also recalls watching Cromer’s production of “The Hot l Baltimore” alongside the director—it was Cromer’s first gig for Mary-Arrchie back in 2002—when the lights blew out. “Rich [Mary-Arrchie artistic director Richard Kotovsky] yelled ‘keep going’, and he brought out candles, and Cromer just sort of died in his chair.”

While nobody will use the word “control freak” or “difficult” to describe David Cromer—although all great directors are oftentimes exactly that—it’s obvious that in the past he has been demanding in the pursuit of that vision. Lavey, who admits “huge admiration” for Cromer’s work, puts it like this: “The passion in David is what I admire; it can also be frankly what drives people nuts working with him because he doesn’t let go, he’s quite tenacious.” “Tenacious” or, depending on with whom you speak, “stubborn.” “Exacting.” “Challenging.” “Specific.” “Ferociously visionary.” “Not always political.” “Not always solutions-oriented.” “Intensely focused.” The list goes on. Like most people’s inability to place where they first met him, everyone alludes to Cromer’s “burning bridges phase” and “bad reputation,” but nobody seems to know where it came from or when. Or if they do, nobody’s talking. And although people talk about the “rumors” and “horror stories,” Cromer walking off shows (and returning to them, and walking off and returning), a year-long artistic and personal fallout that has since been addressed and mended (Halberstam: “I can take equal quantity of responsibility and apologize for my behavior.”), it all appears to be water under the bridge. Edward Sobel, Director of New Play Development for the Steppenwolf Theatre from 2000-2009 and now associate artistic director of Arden Theatre Company in Philadelphia, was around when Cromer directed “The Dazzle” in 2002 and “Perfect Mendacity” in 2008 for Steppenwolf’s First Look Festival of New Plays and has the following take: “I don’t think he’s ignorant of the reputation that he started to acquire, in terms of some of the difficulty, and I think he has since made some efforts to rehabilitate that. I think he’s an absolutely terrific director, and as many good directors try to do, he tried to balance out his sense of what the art needed to be with the limitations of the institution.”

Whether it’s due to age or maturity, as some of his friends seem to think, or the fact that along with the respect he is deservedly now receiving there are less artistic and financial obstacles to overcome, Cromer himself isn’t trying to disregard the “reputation.” He admits that he was probably a bad communicator, and that maybe he couldn’t translate his vision in such a way that it would have made sense to those individuals whose job it was to execute that vision. He accepts the possibility of failing to inspire his collaborators in a positive way, and he clearly dislikes the thought that his communication style may have “…suggested to people that I thought they were artistically bankrupt or morons. Neither of those things is true, and it’s entirely possible I did think that. So you have to learn. You’re never going to get anywhere by making people feel that way.” He pauses to collect his thoughts and then, quite deliberately, says “However, I do not accept total responsibility for the reputation. Really, I don’t. I think that conflicts I had with people were as much their fault as mine.”

Halberstam offers his take: “He had a rough period when he wasn’t political. David dances politics beautifully now, and has risen elegantly and successfully and inspirationally past a difficult period.”

“The creative process is always going to have its moments, but I’ve gotten three amazing shows from that man and I’ve had an amazingly good time on all three shows. If that doesn’t speak volumes, I don’t know what does. I’m not into torture,” says Morfee with a laugh.

For Lowe, it’s personally gratifying to see her friend achieve a level of success following some hard knocks. “I’m very, very proud. I’m like a mama. Given that he did have a rough period here in Chicago, and I don’t know the details of it but I know it was rough, to suddenly see him, like a phoenix rise from the ashes, I am thrilled.” Her voice begins to crack, and her eyes well up. “I feel very, very lucky to be a little part in this show and to know him.”