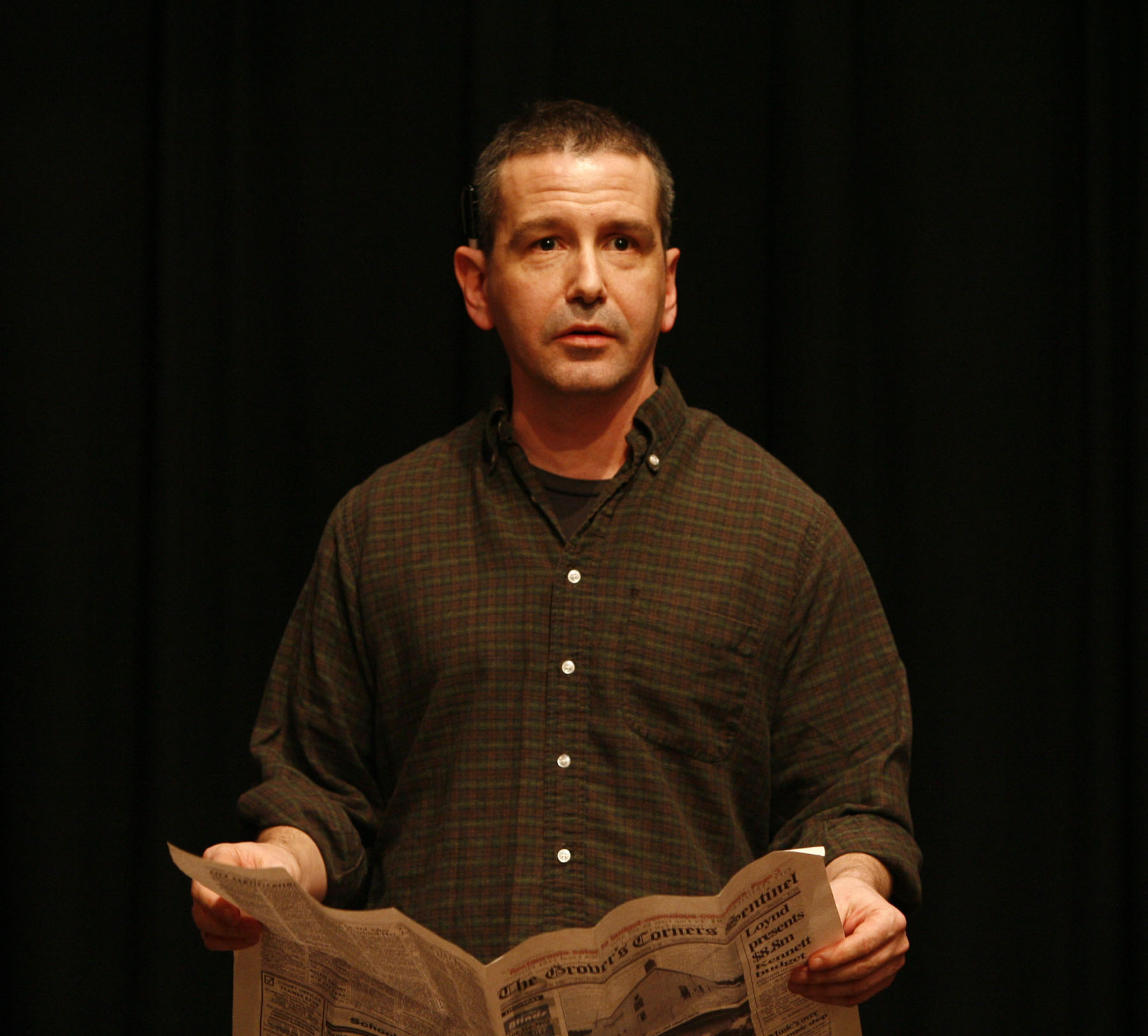 David Cromer in “Our Town” at the Barrow Street Theatre/Photo: Carol Rosegg

In fact, the only person remotely upset with Cromer in this town seems to be Graney. “I had heard about it from the actors, and read about it in the production reports, and I was so mad.” Graney, a “hardcore vegan,” is referring to Cromer’s famous use of bacon in the Hypocrites’ production of “Our Town.” “I never thought anyone would use meat in ‘Our Town’, and I wanted to be a good vegan, but my artistic director won out. But now I want to be clear, no meat when you direct plays for the Hypocrites.”

For a show that has brought Cromer critical kudos and audience accolades in two cities, it is interesting to note that “Our Town” was always Graney’s idea. In fact, Cromer had wanted to do Williams’ “Summer and Smoke” when first presented with the opportunity to direct for The Hypocrites. Cromer expounds on “Summer and Smoke,” “You mean the play I almost talked someone else into doing other than ‘Our Town’? Let’s go on the record here and thank Sean Graney for insisting that I do ‘Our Town.’” Graney remembers that Cromer was “pushing that play hardcore,” but it never clicked for Graney and he didn’t consider it a right fit for the Hypocrites. Cromer agreed to direct “Our Town” on the condition that he play the Stage Manager, and Graney remembers he “stopped listening” to Cromer’s explanation for that choice the moment Cromer mentioned it: “It was such a great idea. My company would have been lucky to have him as a director, and even more lucky to have him as an actor. It had another level of commentary on it.”

Cromer inspires “fierce loyalty” in those with whom he works (Armour counts herself among a core group of actors or Cromer “groupies” and “followers” she says would go anywhere and do anything with the director). It seems the director offers the same in return. Although Cromer had directed a student workshop of “A Streetcar Named Desire” four years ago at Columbia, the play’s been percolating in his brain for more than a decade. Lowe remembers when Cromer first came up to her years ago and said, “I want you to play Blanche.” She felt too old at the time (although Cromer reminded her that the character is actually about 30), and then she felt she wasn’t ready, and it wasn’t until a private reading of “Streetcar” between Cromer and some actors a few years back when she finally thought, “yeah, maybe I can do this.” When it was announced that her good friend, who by that point had moved to New York City, was slated to direct Neil Simon on Broadway, Lowe panicked. “I’m never going to see my Davey again,” she relates. “He’s never coming back to Chicago.” So she did what anyone does these days when they need to communicate something terribly important. She Facebooked him. “I told him how proud I was of him, and how wonderful that all of these fantastic things were happening to him, and they couldn’t have happened to a better person…but I was just thinking of this little ‘Streetcar’…” she says with a warm smile, “and he wrote back and said, ‘yeah?’” “And I said, yeah!” It couldn’t have been longer than a week after that when Lowe received a phone call from Halberstam, who confessed that Writers’ had wanted to mount “Streetcar” for some time, and that the hard-to-obtain rights had been won once Cromer’s name was attached to the project. But that was a year and a half ago, and Lowe thought anything could happen between then and now. Nothing did. And the show, with Lowe playing Blanche years after her friend suggested it, opens on May 13.

For his part, Cromer doesn’t consider himself a Tennessee Williams scholar. He’s read a couple of the biographies, half the playwright’s canon and almost all of the major plays (remember, Cromer “cherry picks” what he wants to know), so whatever the critical response is to his vision for this play, Cromer won’t have too much time to dwell. He opens a new play, Kirk Lynn’s “Cherrywood,” at Mary-Arrchie Theatre Company in June. Carlo Lorenzo Garcia, producing director for Mary-Arrchie, a company known for edgy works and taking risks, confirms that rehearsals begin May 9, which means Cromer will be working simultaneously on two plays, at least for a brief period of time (and surely with the help of some “Cromer crack”). For Cromer, the Mary-Arrchie experience should be “freeing,” a description that makes sense when you think that in many ways it will mean a directorial return to his roots. “He’s like Mamet and all those guys who come out of Chicago,” says BJ Jones, commenting on Cromer’s next project for Mary-Arrchie, “he’s extraordinarily loyal to this city and it’s incredibly cool.” The Mary-Arrchie project does sounds incredibly cool. Garcia, who will be working with Cromer again after having acted in Cromer’s production of “Mojo” at Mary-Arrchie back in 2005, says that they are in discussions to cast an ensemble of upwards of 100 people (the setting of the play is that of a large house party that spirals out of control), as well as reconfigure the Angel Island space seating arrangements and clear out rooms and areas typically used for storage. When Garcia is asked if Mary-Arrchie may be enabling Cromer’s newfound tendency to want to change the blueprint of a theater to fit his vision, he laughs and says, “It’s kind of what he likes to do, he likes to tear it down to fit the world he wants to create, and we’re all for it.”

As for Cromer’s future outside of Chicago, there’s “Picnic” on Broadway, and it seems the producers may be considering names for the cast. Cromer relates a recent conversation he had with an “actress of note” for the role of Madge. “This actress has a fan base obsessed with her beauty and sexuality, and the reaction she elicits in young men is something that she—like this character—must deal with. This actress has to deal with it on a global scale; the character in “Picnic” on a small-town local scale, but it’s the same thing. It could be incredibly useful to have an actor who really understands that profoundly.”

Cromer says he will continue to be frugal with his money (when he’s not throwing it around on friends, of course) and therefore hasn’t decided on whether or not he’ll splurge on a 3G wireless iPad, although this seems due less to the fact that it’s a “big-ticket item,” and more because he hasn’t learned enough about it to decide: “It seems like it’s uncomfortably big to be an iPhone, but does less than a laptop. So I’m not sure what it’s for.”

Other than that, he’d really like to direct the musical “Annie” someday, a show he’s never seen but that apparently has been talking about for years. Graney confirms, “I remember him talking about wanting to direct “Annie” for Defiant Theatre, but I think it was a joke.” Nope, it wasn’t, and recently Cromer found himself pitching his vision for “Annie” to Charles Strouse, Martin Charnin and Thomas Meehan, the show’s creators. “What it is to me is the story of a very strong person in very adverse circumstances, who is young, defenseless, living in a hostile environment, in a country that’s falling apart, and whose spirit is unkillable. The stakes are often not high enough in musicals. I think the stakes are very high in ‘Annie’. I think the adventure story of a little girl is very exciting, and I have an emotional reaction to it. It’s incredibly well-written, it has a fantastic score and it’s incredibly savvy.”

Any producer could see that one of today’s most popular directors, interested in one of yesteryear’s most popular musicals, could be a hot combination. Of course, the theater may have to be gutted to turn it into an orphanage, as well as to accommodate Cromer’s vision of Hooverville.

And how does Cromer feel about gaining a new reputation…as theater demolisher?

“Hopefully, I’ll grow out of this phase,” he says, with that grin.