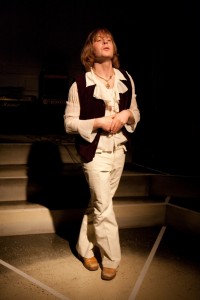 “Aftermath” has many of the qualities that make a good pop record: it’s short, sweet and to the point. Examining the three years leading up to the death of Brian Jones, the founder and original leader of the Rolling Stones, the play encapsulates, in scene and song, moments in Jones’ life that had impacts on the band, and vice versa. We follow Jones from drug arrest, to passionate love affair, to recording session dispute, to palatial hermitage, to death. Tensions arise that pull Jones and the rest of the band farther apart, leaving the latter, especially Mick and Keith, to make harsh yet necessary determinations about the future of the band. This might all seem familiar, with Ronan Marra’s script taking us through the motions of the typical rock-star tragedy, but it’s his direction and the actors’ performances that really make the production sing. Aaron Snook’s portrayal of Jones is particularly effective, though the whole cast bring plenty of verve to their interpretations of their characters and their characters’ music. If there’s any downside to the production, it’s that the music performances tend to have built-in applause moments. By the end, however, you find there’s more than just the songs to clap for. (Neal Ryan Shaw)