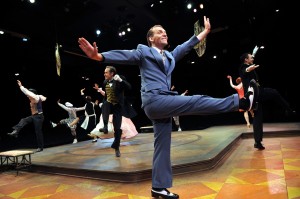 There are so many overblown, satiric musicals for people who hate musicals, but “The Drowsy Chaperone” is a musical unabashedly yet satirically written for people who actually love musicals.

It is a bold and curious paradox for Marriott to be staging the show, given that “Man in Chair,” as he is billed in the show and here played by James Harms, begins his unassuming diatribe about theater complaining about performers running down aisles and breaking the fourth wall in a theater whose calling card is doing exactly that.

The audience howled as Harms, unseen in complete darkness, makes these and other wry and real observations—“How long, Elton John, can we continue the charade?” got the biggest laugh, given the current success of “Billy Elliot” downtown—until we hear about an unlikely 1928 show called “The Drowsy Chaperone,” a faux musical, of course, that we begin to hear through the static of an old record. Suddenly, the show comes to life with characters coming down the aisles and into Harm’s mind’s eye, as it were, as a send-up of one of those extravagant and exuberant musicals of the 1920s.

Here, unfortunately, is where the Marriott production falls short in that the characters are treated so outrageously that the approach is decidedly tongue-in-cheek all evening. The beauty of the original production, of course, is that none of the outrageous characters in the fictional show know that they are outrageous, which is what made the original so much fun.

In the Marriott production, the characters are supplying a constant wink and a nod as if to prod the audience to not take anything seriously. This is a miscalculation that bogs down much of the would-be comedy and the edge of the show, although director/choreographer Marc Robin compensates, as you would expect, with high-energy dance numbers.  (Dennis Polkow)