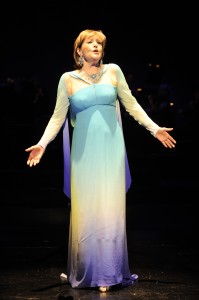 With all of the hullabaloo concerning mezzo-soprano Frederica von Stade’s “farewell” performances in Chicago, it would be wonderful to report that Chicago Opera Theater’s production of Jake Heggie’s “Three Decembers” is a work worthy of the occasion. Alas, such is not the case.

The ninety-minute one-act “opera”—and the term is loosely used—originally written for von Stade and presented as two acts in its 2008 premiere, feels like it goes on forever, traversing as it does three Christmases, each a decade apart. The libretto is excessively chatty and much too respectful of insignificant details of Terrence McNally’s “Some Christmas Letters (and a Couple of Phone Calls)” while providing little in the way of overall development and motivation that would allow us to know and thus care for its three characters: a Broadway diva (von Stade) and her gay son (baritone Matthew Worth) who is losing a partner that we never meet to AIDS as the work opens, and a daughter (soprano Sara Jakubiak), both of whom have been raised with an absentee mother and the well-stoked idealized memory of a dead father.

Is it an opera?  Yes, in the sense that it is through-composed (that is to say, every line is set to music and there is no spoken dialogue apart from music) and that operatically trained voices are employed, though in this case, to considerable disadvantage given that the lead character is a Broadway musical actress, not an opera singer, and therefore it would make much more sense for her to sound something akin to the sound world that her character represents. That also means that voices are more concerned with making beautiful sounds than being clearly understood, which means that short of constantly looking at rapidly fired surtitles instead of the action, such as it is, you will not have a clue as to what is going on here, even though everyone is singing in English.

But the work is hardly operatic in that the sound world is pop-driven with piano and schmaltzy strings, giving the overall feel of opera singers attempting to sing muzak that they do not connect with, with pop posing as “opera” with the disadvantages of each: endless recitative that does not benefit from musicalization and which, in a musical, would not be, with little by way of songs, tunes or what are called arias in operas, i.e., the main reason that people go to either a musical or an opera. The effect comes across as a work that is trying to be “Light in the Piazza” without its melodic charm, or pseudo-Sondheim a la “Passion,” which is also largely through-composed and about letters and scored for chamber orchestra, but lacking that work’s wit or tenderness.

It is hard to imagine why von Stade thought this work appropriate for her, given how little she is like its lead character, who really needs to have much more of a dark edge than von Stade could give the role. And though we do get plenty of opportunity to hear her creamy dark mezzo in low gear, the vocal agility for which von Stade has been so famous for forty years is nowhere to be heard here.

For that, apparently, we will have to wait for August when von Stade’s voice will be put to much better use singing the role of Despina in Mozart’s “Cosi fan tutte” at Ravinia in what should prove a far more meaningful sendoff.  (Dennis Polkow)