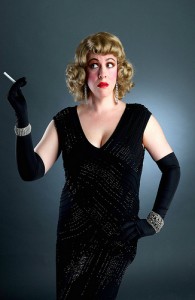 From “Glee” to Lady Gaga, camp is serious business these days. Is there anyone serving it up—or serving it better—than Hell in a Handbag artistic director David Cerda? Based on the strength of one viewing—I’m ashamed to admit it, but I’ve never been to a Handbag show before this one—it’s a question I ask in all seriousness. For the brilliant Cerda appears to be Chicago’s answer to New York’s Charles Busch, a comic performer of the likes of the great cross-dressing performers Everett Quinton and Miss Coco Peru, to name a few, and Hell in a Handbag’s flamboyant wit and theatrical verve akin to what the early productions of the late Charles Ludlam’s legendary Ridiculous Theatrical Company productions might have been like. I can’t tell you how many people this past week—ardent theatergoers, mind you—told me that, although they’ve always heard great things about Hell in a Handbag, like me they’d never checked them out before. This tells me that Hell in a Handbag, which has been producing original plays and musicals in this city for years, enjoys the best kind of core audience:  the loyal, gay kind. Not that this means tolerating stupid plots, bad acting and flimsy production values. In fact, “Lady X,” the new show from Hell in a Handbag, their first original world premiere in three years, succeeds brilliantly for three reasons:  the plot and dialogue are given serious consideration and come across as that of a well-made comedy; the ensemble acting is enviously tight and on par with the best in the city; and David Cerda is a star and gives a star performance.

The setting is crime-ridden New York in the 1940s, with a seedy nightclub that finds a gaggle of “goodtime” girls trying to make a living and maintain some dignity as best they can. Into their world walks Miss Scarlett Fontanelli (Cerda), their ball-busting new madame with a shady past and an ever shadier way of conducting business with the mob and the girls who service them. As in the greatest farces, the plot goes topsy-turvy, everyone’s a suspect and last-minute revelations save the day for the good guys while the bad guys get theirs. It also serves as a template for some of Cerda’s corny jokes, deliciously bitchy bon mots, comic passages of real intelligence and gross-out humor. “Do you have to be a whore on the inside” asks one prostitute of another. When the headstrong Mary Dwight is questioned by a self-righteous D.A., the exchange goes something like this: “Mary Dwight, sit down, I don’t bite.” “Got a light?”  “What were you doing last night?”  “Flying a kite… sorry, I thought we were rhyming.” Cerda loves to go to unexpected places, but when he finds himself in a conversational cul-de-sac he uses it to his advantage, by making it a self-conscious moment of hilarity, as when a character proclaims, “They don’t call her Scarlett because she likes ‘Gone with the Wind’, and they don’t call me Mary because I have a little lamb. Wait, that doesn’t really work, does it?” And there’s a hilariously inane passage that Scarlett viciously delivers to her main rival, Mary Dwight: “There are two kinds of people in this world, those who pack their lunch, and those who buy it.  You buy your lunch, when you should be packing…” Then there is something about feeling sorry for Mary when her tuna fish and roast beef lunch runs out, but I was too busy laughing my head off to keep track of the punch line. 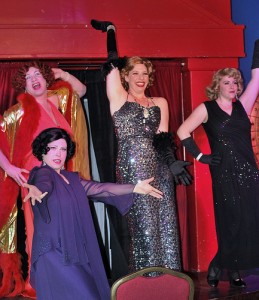 This is lean comic writing at its best, and the technical precision required to pull this off is astounding. The clipped and heightened dialogue, the unforgiving rhythms, the punchy delivery, the timing that is demanded of the ensemble: it’s like speaking Mamet or Pinter while trying to perform Feydeau or Camoletti. And the ensemble executes it beautifully.

Annie Gloyn as Mary Dwight looks like Ann-Margret and speaks like Bette Davis, but never descends into a parody of either of them. Ed Jones, in drag as an aging prostitute, brings warm pathos to the stage. Elizabeth Lesinski, as a dimwitted Southern belle and with her pouty lips and strange comic contortions of her face, reminds me of a young Carol Burnett. And Cerda, in his gorgeous A-line pleated skirts, sequined tops and sparkling bling-bling, with a platinum blonde wig contrasting sharply with his Latin olive-toned skin and thick eyebrows, looks like a combination of Faye Dunaway in “Mommie Dearest,” a tall Latin man and Cruella de Ville.

This is a hilarious and brilliant evening of theater, and Cerda and his crew are indeed showing Chicago that camp is nothing to laugh at. (Fabrizio O. Almeida)