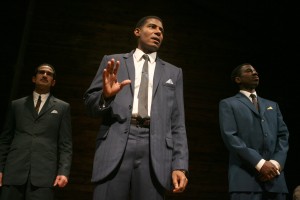 Having been raised in the 1960s, it is sobering to see how romanticized the civil rights movement has become in successive generations. Few old enough to remember will explicitly recall how common and ugly a phenomenon racism actually was from the white side, nor how vulnerable and clay-footed the participants and leaders of the movement were from the black side. Yes, Martin Luther King was martyred for the movement, and we now have a national holiday named for him. But back then, King—viewed by many as “the most dangerous man in America” as FBI founder J. Edgar Hoover infamously dubbed him—was hated on both sides of the race divide: many whites for his “stirring up trouble,” and many blacks, from Malcolm X to the Black Panthers, for his non-violent approach to getting what many thought should be taken by force.

It all looks so nice and neat decades later, but as playwright Tracey Scott Wilson displays in her remarkable civil-rights-era epic “The Good Negro,” this was a war with frailty on all sides. Wilson, a female African-American playwright, dares to show us both sides of what happened, from the inside. The most chilling moment is when a fictional minister and leader of the movement who is a doppelganger for MLK is giving a powerful sermon on one side of the stage—indeed the only side of the story that we still explicitly hear from the era in the retelling—with the inspiring and powerful platitudes that every school child of every race now knows. Meanwhile, on the other side of the stage is a Ku Klux Klan leader complete with the pointed white hat and ceremonial robes voicing the more commonly heard fear-mongering message in the white community at the time: “First, it’s our toilets, then it’s our jobs, then it’s our daughters’ beds.” As each expresses polar opposite and equally passionate American visions, they come together in unison to say, “Help us, my friends, help us keep the South alive.”

“The Good Negro” refers to a commonly used phrase of the era concerning persons of color who did not seek to “make trouble,” those who simply went along with the status quo of segregation and reduced civil liberties. Many black entertainers of the time epitomized this: they were breaking down barriers by being so talented, well-dressed and eloquent that even diehard racists could accept them. Mainstream white America used to listen to Nat King Cole records, would watch Sidney Poitier win an Oscar alongside all of those white nuns in “Lilies of the Field.” Those were good negroes, according to white America. Chuck Berry, James Brown, folks who were too “ethnic,” that was another matter. This is how a white Elvis could make acceptable to mainstream white America a wild new genre that was unacceptable when it was done exclusively by blacks. The same thing had happened in jazz during the swing era: the so-called “King of Swing” was actually a white guy, Benny Goodman. 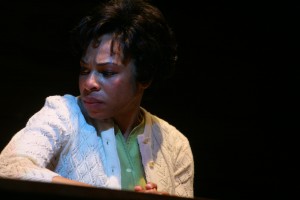 From its portrayal of white FBI agents trying—and often succeeding—in getting the goods on movement leaders, to class and leadership struggles within the movement itself, to family resentment and sacrifices that an ordinary citizen experiences in becoming a movement icon to what a leader does whose wife was sent a tape of her husband having sex, “The Good Negro” pulls no punches in showing all sides, warts and all.

But one actuality that does emerge in sharp relief is that despite the imperfections of those involved, justice did prevail in the long run which, as this play seeks to remind us, makes the fact that it did ten times more astonishing than if said individuals were as perfect as history is choosing to now remember them.

“The Good Negro” is a daring diatribe on a forbidden topic for an era when an African-American president is passionately reawakening many of these same issues and attitudes on both sides of the race aisle. (Dennis Polkow)