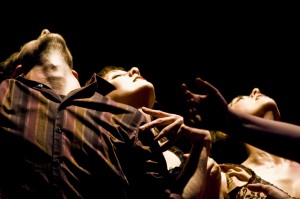 In the attic of a city park building over the shore of a choppy Lake Michigan, a two-year project is reaching its culmination. A handful of dancers under the direction of Molly Shanahan are investigating the possibilities of the human body in motion with the knowledge that this project, if it is successful, will evolve into something entirely new. A warm yet furious wind moans around the windows, adding an element to the performance that is now, in my mind, essential to viewing “Stamina of Curiosity.” At more than one point, the group progresses across the floor as one undulating unit, like a protoplasmic organism or a river, the gales off the lake seeming to both buffet and breathe into the dancers on the floor. In truth, the wind is essential in that moment, in that small hexagonal upper room, for the dancers in Shanahan’s company Mad Shak strive to strip away the artifice of performance, acknowledging their environs, their audience, their own physical and emotional states and accepting the wails of wind as a player in the moment.

“Stamina of Curiosity”—subtitled “Our Strange Elevations” in this most recent incarnation—sprang over two years ago from Shanahan’s ongoing solo movement research project, “My Name is a Blackbird.” Fueled by a fierce desire to break old habits, let go of other people’s standards of success and truly challenge herself as an artist, Shanahan began collaborating with dramaturg Leslie Danzig and Feldenkrais coach Kathleen Aharoni to unlock the spontaneous expressive powers of the body, while cultivating intention and audience engagement.

“I wanted to explore the state of change that occurs when one is being observed,” Shanahan says. “Can I get to a place where that vulnerability is not something to be avoided?” Shanahan is both vulnerable and sympathetic, with large, unguarded eyes and a heart-shaped face that is at once girlish and firmly intent. Watching excerpts from “Blackbird” one can see her gently pushing to become ever more aware, more open to the moment she is experiencing with the people in the room. The aesthetic payoff comes in both fluid, seemingly ceaseless, gyre-like phrases that roll over themselves brimming, abundant in the way nature is abundant—herds of antelope in flight from a predator, boiling lava flows or otters at play in a vast ocean—as well as in quiet, meditative moments, the negative space bracketing and bracketed by effortless kinesis. In a short documentary by Nadia Oussenko about her project, Shanahan states that art is often a barrier between the artist and the audience. “Watching dance is an opportunity for the audience to experience themselves, to delve into their imaginations,” she says. “I want the audience to be able to identify with me as conveying something that’s universal.” 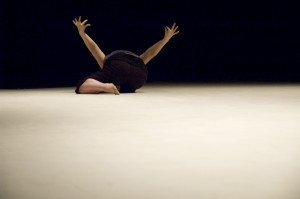 "My Name is a Blackbird"/Photo: Sandbox Studio

Each performance of “Blackbird” is an improvisation and is so process-oriented, yet so rigorous, that watching the piece at its best is like watching the artist living—witnessing the human mind at its most intent with all the failures and transcendences that come with complete commitment. “Blackbird,” from conception to its current state, is Shanahan’s big, cumbersome, epic novel: sloppy moments and flashes of the divine are united together under the greater thesis.

“I was immersed in solo research and I was kind of lonely,” Shanahan says when I ask how “Stamina” began. “I had few people to share moments of humor and delight. Talking with the dramaturg, I was working with the ideas of virtuosity of memory and the stamina of curiosity and I knew the next project would be with a group.” The group work further explores the questions raised by the solo project, particularly in refining the relationship between spontaneity and intent. After performing an excerpt, the five collaborators sit to discuss the work. Each dancer is highly observant and articulate about their own processes. Kristina Fluty notes that the quiet moments are when her internal observer speaks the loudest; Timothy Heck expounds on the relationship between specificity and the freedom to be spontaneous. The united input of these dancers establishes a bigger, more lush landscape and feels less fragile than “Blackbird”; the vulnerability of the performers appears greatly diminished as interplay between dancers is thrown into the equation. The curvilinear movement vocabulary is well defined and, according to Mad Shak, at its final stage. The coming weekends are the final opportunity to see two very thoughtful and touching experiments in the demystification of art.