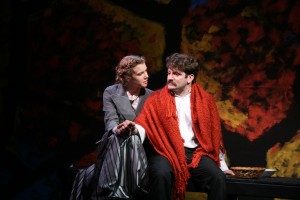 At the end of the nineteenth century, three hyper-intellectuals—Nietzsche, Lou Salome and Paul Ree—planned to live together in chastity in service to their philosophical work. Ken Prestininzi’s play attempts, Stoppard-like, to imagine this hypothetical plan, but cast as a slapstick farce of a frustrated love triangle. Sadly, the play isn’t smart enough to elevate the histrionics of the production, which includes, for example, a scene of Nietzsche masturbating into a shoe assisted by Ree, and Ree prancing around in Salome’s dress. While some of the jokes land, more often the action is embarrassing, both for the actors and the historical figures they’re trashing. It’s also an uneven production; director Kate Hendrickson mixes over-stylized expressionist choreography with cheap gags like a narrow trap door to Salome’s bedroom that gets used constantly with extreme awkwardness by everyone, and acting ranges from compelling, controlled performances by Tiffany Joy Ross as Nietzsche’s sister and John Kahara as a perfectly pathetic Ree to confusingly exaggerated staginess by Sara Tolan Mee as ballbusting Salome and Antonio Brunetti as a supremely edgy Nietzsche. When Nietzsche lectures to an audience (advocating raping women, among other things) after Salome turns him down and describes women as “an awful comedy of what had once promised to be sublime” it’s hard not to wonder if the show, which calls itself an awful comedy, means to be mortifying or is just a farce that can’t land on its feet. (Monica Westin)