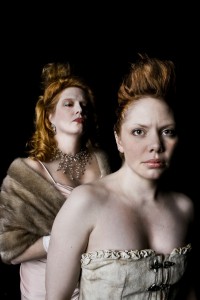 Has the word “awesome” been bereft of all its meaning and power yet? Or, if I use it to describe Dream Theatre’s “Electra,” can I do so without seeming like I might as well be talking about Cats in Sinks or last Tuesday’s episode of “Lost”? Well, I’m going to say it anyway: Dream Theatre’s “Electra” is AWESOME. The second part of artistic director/playwright Jeremy Menekseoglu’s reinterpretation of the “Oresteia” trilogy, “Electra” finds the major players of the story celebrating the sixth anniversary of the death of King Agamemnon. Clytemnestra and her lover Aegisthus have banished her son Orestes to the East, and married her daughter Electra off to a swamp buffoon named Pamphilos. When a stranger comes to the swamp with a sword strapped to his back, Electra recognizes him as her long-lost brother Orestes, the champion she requires for her plans of revenge. In nearly every aspect, “Electra” delivers as a chilling, profoundly moving, deeply disturbing piece of theater that will continue to haunt you after the show’s over. Dream Theatre has imagined a fully realized stage reality in which poor, gutted teddy bears hang above archways and chorus members don’t just narrate but become part of, and draw you into, the action. In “Electra,” blood runs the same neon blue as the creepy electric cross that hangs above the doorway of Electra’s swamp home. As Orestes and Electra, Menekseoglu and Anna Weiler together are wonderful, their reunion even tinged with the slightest incestuous tension. And Rachel Martindale’s Clytemnestra has the bearing of a true queen, regardless of her evil deeds. I can’t say that Weiler really carried the show, however. Certainly looking the part with shorn red hair and strapped into a corset and a pair of Docs, Weiler’s portrayal of the title character never ventured very far beyond mean intensity. Just as Electra needs Orestes, Weiler ends up stepping aside to let Menekseoglu deliver most of the play’s emotional heft. But if you sit patiently through the silly Deathday Party preshow in the lobby, you’ll see some magic happen in the deep dank swamp, finding yourself smack dab in the middle of a story both centuries old and painfully fresh. (Neal Ryan Shaw)