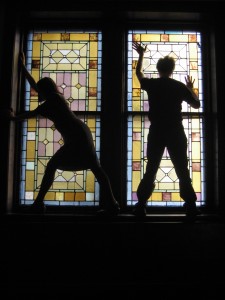 To get it over with at once, Plasticene’s “From A Fading Light” fails so miserably as the work of serious high-minded art it so desperately wants to be, that one could almost appreciate it for the piece of entertainingly pretentious theater it does not intend to be.

The trouble starts early on. You’re handed a playing card with a picture of a particular bird species on it and instructed to stay with your group as a preteen-looking pagegirl, wearing a costume that wouldn’t be out of place at the Bristol Renaissance Faire, ushers you around the three levels of the St. Paul’s Cultural Center, a dilapidated church and rectory that serves as the playing space for this multi-site-specific event. Down into the basement. Through the labyrinthine corridor to the kitchen. Up a winding staircase into the attic. Outside onto the patio. Although I was part of the “Blue Jay” group, there must have been a “Crow” group since another pageboy would frequently emit a “caw…caw…caw” call while shepherding his small group past mine. What this bird motif has to do with the actual show, I have no idea.

What follows are a series of nineteen or so terse scenes between two or more individuals (the production features a total of six performers, three male and three female) with little spoken narrative. Two women chop carrots and prepare a stew in the kitchen, the aroma of which smelled wonderful but made my already-unengaged mind contemplate post-show dinner options instead of what was happening in front of me. Two men stand outside a restroom door and sound like they’re running lines for a Beckett play:  “I can’t go in there”; “There’s nobody in there;” “I don’t need proof.” Two characters sit in front of a television and listen to filmed actors performing dialogue in Spanish and Japanese on a video loop. (A scene much later returns to this same spot and uses this same setup, but now the actors watching the video mimic and phonetically repeat one Japanese phrase to the point of absurdity. The audience around me seemed to think this was funny; I thought it bordered on cultural insensitivity and smacked of puerility.)  Outside in the backyard, the actors fill a tub with water, wash their feet and change their socks and shoes. A woman does an interpretive dance with an urn. Books have their pages torn from them. Walls are desecrated with chalk scribble nonsense words. The actors interpretively dance on the sills of large stained-glass windows, and later spend a good five minutes raising and lowering those windows in musical canon. The evening’s piece de resistance, however, is an extended sequence that finds the audience standing on the altar facing the six performers who sit in the pews. As electronic music, multi-colored lights and projections dizzy the eyes and ears, the performers create choreographic movement in and around the benches, resembling human creepy crawlers as they climb in, around and on top of the pews and create a real sense of drama, the evening’s only drama, if only because one small misstep could see the performer come crashing down on those pews. I guess if you’ve ever wondered what it would feel like to be trapped inside a church with a bunch of emotionally disturbed individuals for eighty-five minutes, then this is definitely the show for you.  For everyone else…

Clearly, a lot of intelligent people have put a lot of hard work into this misguided project, but I think I understand the kind of experience Plasticene wants to achieve here:  non-linear, non-textually-driven, improvisational, collaborative, physically based and multimedia-heavy theater, the kind of performance that wants to involve its audience, even as it works hard to distance them with all the ambiguity and amorphousness. The problem is that while the themes that run through the show—loss (literal and metaphoric), fear, the unknown, the inevitability of change, ritual and communion—are hardly trivial, the evening as a whole is, because there is no context to any of it.  The creators have remained content to simply dabble in meaning, instead of shaping it. And unfortunately, the ideas and images are never potent or theatrically visceral enough on their own to inspire meaning from its audience. With no emotional, spiritual or psychological impact whatsoever, “From A Fading Light” becomes little more than a series of empty theatrical gestures. And anyone walking away impressed with the imagination and execution on display here clearly hasn’t done the round of world theater. Because once you’ve seen how beautifully and seamlessly New York’s Wooster Group can integrate video installation into live performance, once you’ve witnessed moments of real wonder in a show directed by Peter Brook and born out of physical improvisation and experiment, or once you’ve experienced Simon McBurney and his British-based Complicite’s brand of abstract, unclassifiable yet emotionally-rich storytelling, I’m afraid this Plasticene nonsense just doesn’t cut it. (Fabrizio O. Almeida)