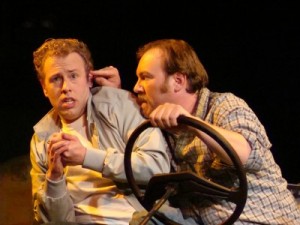 While anyone involved with theater is familiar with the concept of a stage whisper, what director David Fehr needs to introduce into Ka-Tet Theatre’s new show—the uneven and vaguely metaphorical “Sun, Stand Thou Still”—is the stage yell. Maybe it’s the tight quarters at Stage Left Theatre or the often sudden outbursts of the actors, but by the time the explosive finale of Steven Gridley’s meandering play is reached, it feels like far too much emotion is expressed through actors raising their voices to their maximum volumes rather than engaging each other.

There’s promise in this story of two men—a spastic hitchhiker and a half-blind driver—travelling eternally west on a straight road (so straight, in fact that the driver rarely needs to watch the road or hold the steering wheel), but too much time is spent following a bumbling cop and discussing how much liquid the human bladder can hold. (Seriously, there is a LOT of talk about urination.) The imaginative set design by Isabella Ng does add a touch of life to the proceedings. Perhaps run as a single act with thirty minutes cut from the often repetitive script, “Sun, Stand Thou Still” would be much more engaging. (Zach Freeman)