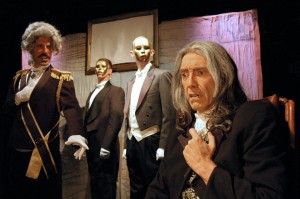 “She thinks she’s a parrot—and she may be right, ” one character says to another of a character called The Mummy, halfway through Oracle Productions’ terrific staging of “The Ghost Sonata,” and to my mind this line is the perfect encapsulation of the internal logic of Strindberg’s 1907 chamber drama. It’s a world where the dead and the living cohabitate in the same plane, wardrobes represent houses and the properties of dimension and perspective are warped into a bizarre physical reality. Oh, and there’s a vampire and a mummy. When a young student visits the home of a seemingly posh family, the doors open instead into a house of horrors, full of hateful people who lie and cheat and deceive, the rotting remains of their younger selves’ hopes and dreams. And once you’re in, there seems to be no way out. In this way, the play conveys a sentiment that prefigures Sartre’s aphorism “hell is other people” by a good forty years. Director Max Truax’s ambitious production gets the play right by pitching it as a dim, candlelit nightmare, with a design that distorts physical space into a thing just beyond reality. Purely brilliant is Jonathan Guillen’s original score, performed by a vibrating, swelling, hypnotic string quartet. (Neal Ryan Shaw)