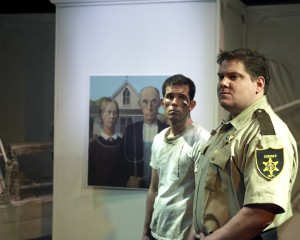 Despite its prosaic title, “2,000 Feet Away” is actually a delicate and complex play that takes on a delicate and complex issue that few if any playwrights are tackling today: adults having sex with minors. If I hesitate to use the term pedophile it’s because the play, an American premiere by Steep Theatre Company, isn’t really about pedophilia, even though Australian playwright Anthony Weigh confusingly includes a very minor character, a man in his forties corresponding with a pre-pubescent girl, who’s clearly a pedophile. It also doesn’t help matters when the law, such as that from the 2005 Iowa State Legislature that made it illegal for a registered sex offender to live within 2,000 feet of child-populated places like daycare centers, schools and parks, blurs the distinction between a sex offender, someone who has had intercourse with a person under the legal age of consent, and a pedophile—an adult who eroticizes and has sex with children. It may sound like I’m splitting hairs here, but the subject fascinates me and it’s important to make a distinction between a card-carrying member of NAMBLA, the highly controversial, highly illegal and gay-community-divisive North American Man Boy Love Association, and a gay man in his thirties or older who has a positive, affirming and consensual sexual relationship with a teenager. These complex cross-generational relationships have also been well-documented and embraced within the lesbian community, but are almost entirely unknown and incomprehensible to heterosexuals. It’s a thorny and controversial issue. It’s tough to have an intelligent discussion about this with a diverse group of people without offending someone. And quite frankly, you’ll look at this play in a different way whether you’re gay or straight and whether you have children or not.

The play’s opening scene has a quiet, chamber-like intimacy and intensity to it that’s like something out of a 1970s Bergman film. It’s a prologue to the rest of the play and it takes place in the Art Institute of Chicago. In front of Grant Wood’s iconic painting “American Gothic,” a thirty-something man named A.G. interacts with a boy in his mid-teens. As played by actor Benjamin Sprunger, A.G. is an attractive, mild-mannered and soft-spoken man—think of actor Campbell Scott and his mysterious sexiness and understated line deliveries and you get the idea. A.G. nervously flirts with the teen; the teen nervously flirts back. They’re both testing boundaries, curious about one another and clearly fascinated with this unknown attraction. You could look at the situation as one in which a predatory gay man is landing a naïve victim, but the playwright’s terse dialogue is so elliptical, the psychological underpinnings so complex and the physical attraction so raw that I read it as a scene between an uncertain young man, discovering his emotions and how to articulate them, and an older man, certain of his emotions but no longer thinking he has them to offer. The rest of the play doesn’t even come close to this philosophical and artistic exploration of the unique experiences between older and younger gay men, even when one party is below the legal age of consent, and so the tense opening is at best a hint of the play that might have been. You can’t blame Weigh too much. Few writers are going to open a can of worms that quite frankly many people—gay and straight—would be ready to throw back in their faces, and so the remaining eighty-five minutes of “2,000 Feet Away” remains palpable and safe.

Indeed, the rest of the play takes place in a small town in Iowa and sees A.G., already a convicted sex offender, living a humdrum life working as a clerical assistant and spending his free time playing piano. He rents a room in the house of a middle-aged couple who are aware of his past, don’t care, and who twice remark on how much older in age the man in Wood’s iconic “American Gothic” painting—a print hangs in their kitchen—seems to be than the woman. When A.G.’s past is discovered, the local deputy is forced by the community to haul A.G. out of town someplace where he won’t be 2,000 feet near a teenager or child, and the rest of the play follows the deputy and A.G.’s travels and interactions with a host of individuals. The deputy, as played by husky actor Brendan Melanson, is a good, honest man who, nonetheless in the eyes of the community, eats too much, doesn’t date enough and should attend church more often. In Weigh’s play, this heterosexual deputy has more in common with a convicted gay sex offender than you might think:  they both suffer the stigma of daring to live their lives outside of social and community norms. As well, the “American Gothic” running joke of the older man and younger wife entertains the idea that there is a difference between one’s biological age and one’s mental age.  These are the safe thematic threads behind which “2,000 Feet Away” positions itself, and if the playwright didn’t write the play I wished he would have written, I give him credit for at least initiating a dialogue.

Jimmy McDermott directs with incredible sensitivity to the material, and laudably presents some of the more controversial moments sans judgment. He’s also responsible for the play’s set, a brilliant white box of a playing space that reminds me of those chic and modern designs a la Mark Thompson that were the setting for some of the 1990s most memorable debate plays. There isn’t a weak link in the cast, and because of this every character, no matter how small, makes a huge impression. But the biggest impression made is by Steep Theatre Company and the courage they’ve shown by mounting this tough, thought-provoking drama. It’s easily the best adult play in town right now. (Fabrizio O. Almeida)