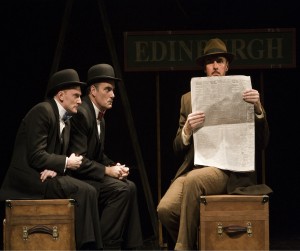 The premise of this show is simply to take the shooting script for the 1935 Alfred Hitchcock film “The 39 Steps”—one of the best films Hitch made in England before he moved to Hollywood—and have it acted out with a clever cast of four, with three of the actors taking on multiple roles, often right within the same scene. Add to that constant references and canned soundtrack bits from Hitchcock’s later, better-known American films and popular television series and you have an evening of live thriller references that may send sleuth nerds into orbit as they one by one tally up the source of the allusions.

Would that all of this added up to a meaningful whole worthy of the Master of Suspense by actually supplying some, but the references themselves are usually so forced and clichéd that they tend to stick out of the plot like a sore thumb: “Which way did they go?” “North by Northwest.” Yikes. Add to that a detachment of the cast from each other and to the audience and you have a rather wooden evening, a bit like trying to stage a game of “Clue.”

The genius of “The 39 Steps”—and there were better examples later on—is the perennial Hitchcock theme of a wrong man being accused of a crime and setting out to prove his innocence across a labyrinth of layers of threats, both real and imagined. Here, the culprit is a secret organization, but given the puerile, comedic treatment of a “Murder by Death” sensibility, we never buy said organization as a threat, nor the murder that occurs early on as real, nor any of the danger or threats to be, well, dangerous or threatening. That, taken with the fact that we never identify with the lead character who “narrates” the show from an easy chair, nor with the other actors who are so busy coming in and out of characters that we never perceive them as around long enough to generate genuine menace.

It was hard not to wonder how much of the problem with this show was its execution rather than the material itself. When Mr. Memory, for instance, takes the stage and accepts questions from the audience, why not have these at least begin as real questions from real people and actually involve the audience? Making the audience care via participation could make all of the difference on this one.  (Dennis Polkow)