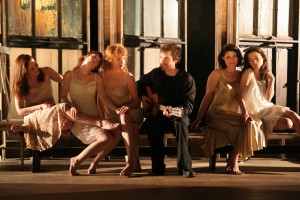 This early Brecht musical, centering around a hedonistic antihero, presents a huge intellectual and aesthetic challenge to any acting company, but after TUTA’s “The Wedding” this fall, another early Brecht adaptation, it’s no surprise that director Zeljko Djukic handles it adeptly. In fact, one leaves wondering whether Brecht’s first, and obviously most juvenile, play is frankly worthy of their treatment. Baal has historically been presented as a rock star, a heartbreaking romantic figure drunk on alcohol, women and nature, where the entire plot of the play revolves around his use and abuse of women, the fallout thereof, and his eventual tragic demise. It’s not a politically correct show, to say the least. TUTA’s byline for the show frames Baal with an updated, twenty-first-century hipster rhetoric: “Is it better to stick to one’s beliefs or sell out?” the show asks, and if anything it presents Baal perhaps a bit too earnestly; is this really an appropriate question to attribute to a character who abandons a women he impregnated after another of his lovers drowned herself in the river? However, Ian Westerfer’s Baal, over-glorified or not, leads the cast with a massive ego and the combination of charm and sleaze the role requires; and the ensemble around him keeps up as a dynamic chorus of victims. The show’s greatest strength is its atmosphere, dark and evocative, with a particularly effective musical score by Josh Schmidt that ranges between ballads, elegy and folk music. The show is done without an intermission, with two straight demanding hours—there are a lot of plot lines to follow but no real dramatic arc—leaving any audience exhausted, but perhaps suitably so, at the end. (Monica Westin)

At the Chopin Theater, 1543 West Division, tutato.com. Through June 20.