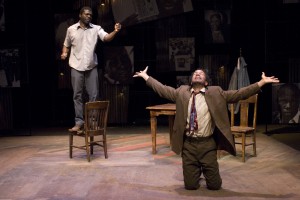 Don’t let the exotic title fool you. “Sizwe Banzi is Dead” speaks loud and clear to a contemporary audience on at least three different levels: as dazzling monologue play, as powerful political drama and as valuable social history chronicle.

The play, a collaboration between writer Athol Fugard and South African theater artists John Kani and Winston Ntshona, began life in the early 1970s, and features a back story as vibrant and fascinating as the play itself. Censored heavily throughout its early life, the production experienced the dehumanizing effects of apartheid when its black writers had to pose as Fugard’s servants in order to remain working artists on the play. Another horrifying absurdity of the times was the so-called “pass laws” that regulated and restricted the movement of blacks in the country and what they could or could not do for work. Indeed, moving around from town to town in search of work or to plant new roots became as complicated and dangerous for some as if they were actively participating in a political protest. Forced to carry around a pass book that had to be produced on demand, blacks experienced what someone today would if they were forced to wear an electronic ankle bracelet tracking their every move.

In the play, the title character is knee deep in a nightmarish pass-book dilemma, unable to return home to his family and unable to remain in town for some much-needed work. When the opportunity presents itself to assume a dead man’s identity, and therefore inherit his valid pass book (albeit with a little photo editing), he must decide whether to voluntarily “kill” Sizwe Banzi or allow the country’s white-man regime to do it for him. The banter between Sizwe and a fellow sympathizer forms the bulk of the play, and themes such as identity, the meaning of a name and the depths to which one will go in losing their personal dignity for the sake of their loved ones and country percolate throughout. But the play offers more than that, including a thirty-minute opening monologue by a character named Styles, who leaves his oppressive job as a Ford factory supervisor in Cape Town to start up a small photography studio, warmly and beautifully evoked by Jack Magaw’s sets and Lee Keenan’s lighting, through which he can record the “history and dreams” of his people and therefore find dignity, artistry and activism in his work. Later in the play, he will cross paths with Sizwe to take his pass book photo, but at first his beautifully constructed monologue—a tour de force performance piece by the actor Chikè Johnson who plays Styles—hilariously, poignantly and memorably sets up the world of the play, a world that, sadly, might realistically exist today. (Structurally, Fugard, Kani and Ntshona’s marvelous opening—a supporting character captivating an audience with a personal monologue, dripping with political insight and fervor, predates Tony Kushner’s “Homebody/Kabul” by almost three decades, a play that also features a dazzling opening monologue by a character who would perfunctorily figure into the bulk of the play’s later drama.) The final third of “Sizwe Banzi” consists of smaller though no less memorable monologues by Sizwe as he weighs the life-altering decision at hand.

Director Ron OJ Parson moves things along energetically—the intermission-less production clocks in at ninety minutes—without sacrificing depth or feeling, and along with Johnson, whose thirty-minute solo turn is a master class in seducing an audience and making them surrender to his every utterance, the production’s two-person cast includes Allen Gilmore in the title role, an actor whose projectile missile of a voice—he is as devastatingly precise at hitting an emotional nerve with a mellifluous whisper as he is with a shout to the rafters—is only matched by his nimble physical prowess. Both actors have made certain that a 38-year-old political drama hits our ears with an urgency and exuberance that might come from a play written yesterday. Because, above all else—the entertainment factor, the historical relevance—this is a very optimistic staging that ultimately celebrates the resiliency of people, even in the face of one of world history’s most disgraceful moments. Court’s revival proves that Sizwe Banzi isn’t really dead; his spirit is alive and kicking and shaping hearts and minds in Hyde Park. (Fabrizio O. Almeida)