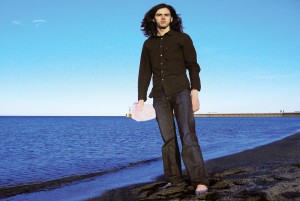 In this numbingly drab one-man show, actor Ben Pardo languidly moves around the sparse stage reciting poetry for a full hour—and although the amount of memorization here is rather impressive, the delivery is decidedly not. From very brief Emily Dickinson and A.E. Houseman pieces, to the lengthy Samuel Taylor Coleridge classic “The Rime of the Ancient Mariner”—which takes up more than half the show’s running time—Pardo imbues them all with the same lifeless line readings.

If these were original pieces, or even more obscure pieces by renowned writers, these dull recitations may have retained a bit of interest, if only from a scholarly viewpoint, but Pardo has chosen standard texts, including the infamous “Hamlet” soliloquy—yes, the one that begins “To be or not to be!” Pretentiousness, thy name is Pardo.

Even the most stirring Shakespearean dialogue falls flat here: lengthy pauses are deadening to the show’s already bloated running time, the blocking feels like mere wandering and by the end I expected an undergraduate professor to stand up and begin giving notes on basic dramatic delivery. (Zach Freeman)