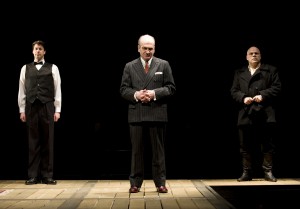 Many a great disaster film begins with a disheveled scientist making a discovery that is bound to change the course of human civilization forever. And yet, when he stands before a delegation of politicians or military leaders, no one listens. Next Theatre’s “War with the Newts,” based on Karel Capek’s 1936 novel, has a similar scene, and yet it doesn’t come until halfway through the second act. Mr. Povondra (a spirited Joseph Wycoff), butler to a Czech industrialist, claims responsibility for having opened the doors that led to the discovery and exploitation of a new species of pearl-diving, island-building newt-people, who eventually grow smart enough to desire world takeover.

While the adaptation necessarily finds a new satirical target despite remaining in the original time period, it can’t reconcile its new environmental slant—with overtures toward Katrina and the recent oil spill—with the unavoidably human element of Capek’s pre-WWII prescience. Povondra’s mission through all this is to record the history for which he takes responsibility, but as inevitable as the newt uprising may be, it’s not a history we feel doomed to repeat.

The ensemble, especially Will Zahrn as the industrialist and Steve Pickering as a swarthy sea captain, certainly bring welcome theatricality to this science-fiction narrative, though. The elegant period design by Collette Pollard takes advantage of Loyola’s generous facilities, and yet the newt puppets, though beautiful, seem unnecessary. Jason Loewith’s direction finds a well-paced balance between humor and horror. (Neal Ryan Shaw)