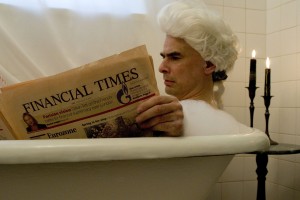 Imagine if NPR—in particular, perhaps, the “Planet Money” show—were a theater company, and “Casanova Takes a Bath” might be something they would produce. In this one-person show, writer/performer David Isaacson takes a topic as dry as the recent American financial crisis, and overlays it with the lens of eighteenth-century libertine Giacomo Casanova, suddenly making the narrative of the financial crisis as saucy as a Harlequin romance. As Isaacson bounces between his portrayal of Casanova (building his costume from his wife’s closet) and a “heightened, theatrical” version of himself, reading memoir excerpts from a lectern on the one hand and pulling headlines from a tall stack of newspapers and arguing with math on a chalkboard on the other, you have to marvel at the kind of mind that could see the parallels between two such seemingly disparate worlds. Yet, while you may not come away with any deeper understanding of economics, Isaacson’s insightful antics are nothing short of a revelation. (Neal Ryan Shaw)