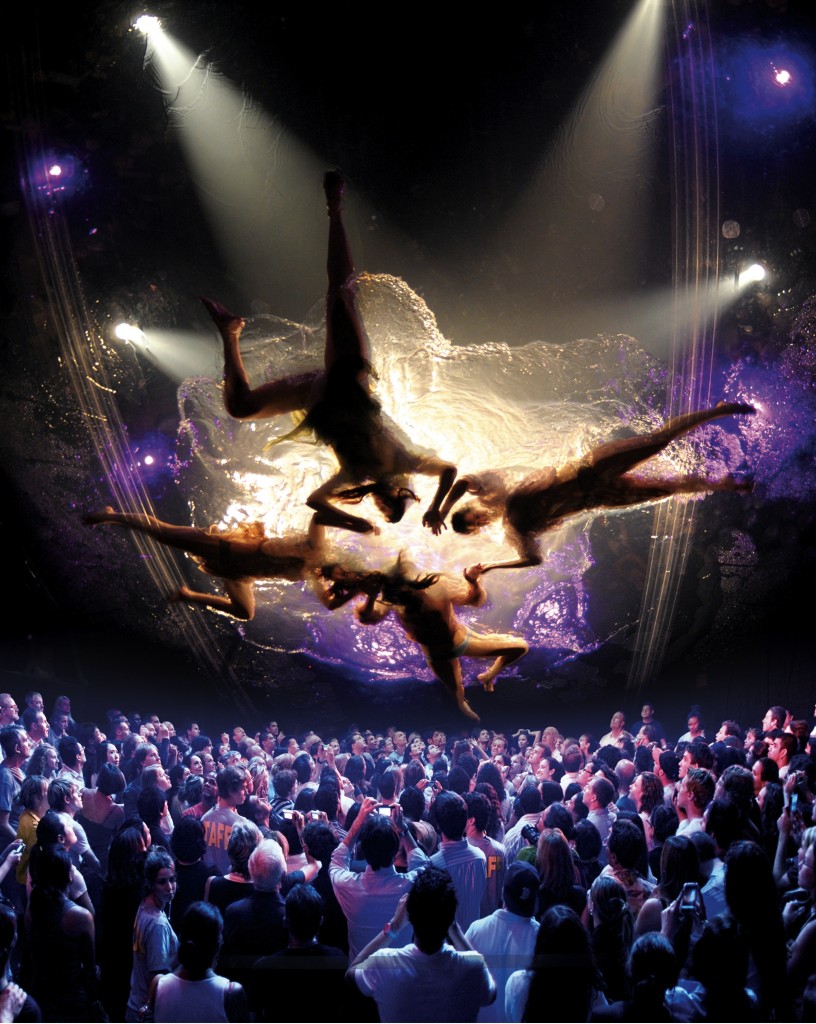 There are no seats for “Fuerza Bruta: Look Up”; you’ll spend the entire sixty-five minutes standing on the stage of the Auditorium Theatre. Actually, you’ll spend most of the time jumping, cheering and dancing along with the joyous cast of this truly spectacular event, leaving the theater in a state of euphoria, wanting more. Or not, if your idea of a night at the theater is a well-defined personal space and a performance that at least attempts to create a cohesive narrative. Cohesion is consciously, anarchically rejected in “Fuerza Bruta,” as evidenced in one of the pieces—the show is made up of a series of disconnected performance fragments—when the cast is crammed into a too-small room above and in front of the audience, fidgeting to the point of destruction, where walls made of boxes, furniture in the form of checkered-tableclothed plastic tables, chairs and trash cans are soon rained down toward us. Soon free of the confines of conformity, the cast breaks into a joyous dance before descending the stage to frolic amongst the audience, dancing, breaking harmless styrofoam forms over unexpectant heads and then suddenly disappearing to regroup for the next piece.

A cultural mashup that might be the perfect entertainment for our times, “Fuerza Bruta: Look Up” is a burst of joy, a feast for the eyes, ears and mind. A fin-du-monde what-the-hellness seems to wash over the whole affair, sometimes decadent, sometimes erotic, always playful. The cast is a handsome mix of youngish boho chics, with a vaguely exotic aura emanating from the Argentinean origins of the work’s artistic director/impresario Diqui James (who also co-founded the seminal “De La Guardia”), composer Gaby Kerpel and many of the other key creators and cast members. The show’s pieces seem to alternate between a dystopian futurism and a utopian surrealism, with tableaus distinctly conjuring up visual art motifs from those movements. Or, alternately, men suffer, women play. As in a man, in a suit and tie, running on a giant treadmill for no apparent reason. He is shot, wounded and keeps running. Does he represent the seemingly constant state of political turmoil, with coup d’états and brutal military regimes that haunt Latin America? Or perhaps the inextricable blend of big business and violence that accompanies commercial power flexed outside its natural borders? Juxtaposed with such dramatic imagery, women soon frolic balletically on a giant shimmering wall, as if dancing on the wind. Later, erotic nymphs enchant the crowd in a giant overhead dipping pool of sorts, conjuring up Homerian Sirens, Surrealism and synchronized swimming at the same time.

The media is inclined, by practice,  to place cultural events into pre-existing buckets: dance, film, music, theater and so on. It’s a generally effective strategy, except when faced with work that seems destined for a particular bucket even when most of its attributes fit better elsewhere. In some cases, critics are well prepared for such undertakings, especially those rare birds who can pontificate with equal authority on theater, dance and, say, opera. Occasionally, editors attempt to solve the challenge with multiple takes. For example, the New York Times recently covered the Broadway musical “Fela!” as both theater and, separately, dance and, of course, music. But few publications have the room to dedicate so much to a single show and so most cross-disciplinary events get dropped into one bucket or another. Since “Fuerza Bruta” is being produced in Chicago by a theater producer, Broadway In Chicago, and press handled by theatrical press agents, most publications sent theater critics to cover it. And theater, in any traditional sense, it is not. 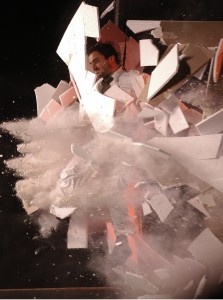 What is it then, “spectacle”? The problem with a broad categorization of performance as “spectacle” is that one spectacle has little in common with another, as I’ve learned. Cirque du Soleil, for example, pioneered the mass appeal of event-spectacle using the circus as its central defining motif, one that it has worn a bit thin after many years, yet one it seems unable to move beyond.

As one of those who’ve moved from awed by to over with Cirque du Soleil, I still fell for the hype machine designed to draw audiences to the spectacle on horses, “Cavalia.” With two intermissions and a total running time just under three hours, wherein an audience was expected to get excited about equestrian feats of surprisingly modestly interesting accomplishment, I had one of the most excruciating nights of my life. (Some, apparently, enjoyed it.) My guard was forever raised against spectacle backed by forceful PR. So when the buzz behind Fuerza Bruta started sounding a bit too familiar, I made plans to avoid it, even if I did live just a few blocks away.

Fortunately, an advance media “sampler” of the show, featuring two of its acts, seemed within my tolerance threshhold, so I checked that out. Not only did I decide to see it, I also decided to review it, given my experience covering both  contemporary dance and DJ-driven danceclubs in recent years. And that the press opening, with its bevy of theater critics who likely never stepped foot in the likes of Crobar in their or its heyday, would not be the proper compadres with whom to experience this. Instead, I would attend one of its late shows, held on Friday and Saturday nights at 10pm, where I would be comfortably among the oldest in attendance. (Critics in packs tend to be very restrained creatures as a matter of public form; they usually get paired with the most avid friends-of-the-cast opening-night cheerleaders who are there to compensate for the critics’ overdone decorum. I wonder, in retrospect, how it all worked out with this one. As the show’s creator, Diqui James, writes in the program: “We can choose how the actors respond to the stimuli, but we can’t do the same with the public. They will always respond in a truthful manner, unplanned. If what we do doesn’t move them, the work collapses during the show.” This is always true of theater to some degree, but much more so with this show, where the jubilation of the crowd is contagious, or its absence, toxic.)

Spectacle and nightlife have long been easy bedfellows, harking back at least to the days when Bianca Jagger rode a white horse into Studio 54, through the days of Chicago’s Limelight, when performance artists in all manners of costume, encased in glass display cases, greeted visitors upon entering, and up through an explosion of creativity in the rave years of the nineties. A few years ago, when I was spending too much time in nighclubs covering DJ culture, I used to dream of seeing the best elements of contemporary dance and performance art matched up with the music and unabashed hedonistic joy of the nightclubs, but we were too far gone into the bottle-service circles of hell to get there. The culture in the club was on hiatus. Burning Man was in the desert.

The creators of “Fuerza Bruta” draw directly on elements of dance-club culture. The show’s “overseen” by a DJ high above in a booth, dropping stripped-down beats, a sort of techno/progressive house fusion cooked up by composer Kerpel, with excursions into progressive trance to match up to the softer sections of the show. And then there are the toys familiar to any clubgoer: fog machines, strobe lights, even a mist-sprayer to cool off an audience building up its own steam. And there are great moments of hands-in-the-air, audience jumping in ecstasy (some perhaps even on Ecstasy) that recall the fan-frenzy that greets the likes of Paul van Dyk when he drops by Chicago to play some records on a world tour.

Regular visitors to the Auditorium Theatre, for the ballet or other events, will likely be awed to see a beloved icon from such a different perspective. Regular nightlife denizens will be pleased with the familiarity of such a venue, since it’s a longstanding tradition to convert “the ruins” of culture—old theaters, churches, even subway stations—into dance clubs. In any case, the view of the Auditorium, standing from the stage, with the lights outlining the orchestra seats through the balconies dimmed into ornamentation, is breathtaking. And fortunately, so is the show that soon fills its stage. (Brian Hieggelke)