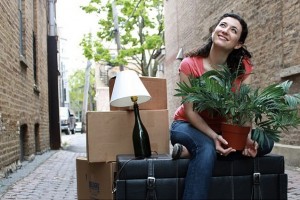 The best thing about playwright Brooke Berman’s “Hunting and Gathering, ” a trivial and sometimes idiotic piece of writing, is that it’s been given a snappy and decently acted production by Theatre Seven, which means that the experience—if you must go—isn’t as painful as it might have been. Otherwise, “Hunting and Gathering” is one of those neurotic, self-consciously idiosyncratic New York comedies that thinks it’s smart because it can fold references to Woody Allen films, Rothko and Hardy’s “Tess of the d’Urbervilles” into diarrhea-of-the-mouth dissertations on Craigslist, IKEA and the arcade hunting game “Big Buck Hunter.”

It’s a Chicago premiere, but I’m perplexed as to why it arrives here courtesy of Theatre Seven, whose mission it is to “…produce work that speaks directly to the diverse Chicago community.”  “Hunting and Gathering,” with its insular New York references and elitist attitudes, has little to impart to down-to-earth Chicago theatergoers.  Observations about WASPy New Englanders such as “She’s not cold; she’s just from Maine” would mean nothing to a Midwesterner unless they had schooled on the East Coast or read Bret Easton Ellis. I attended Amherst and love my eighties literary Brat Packers, so I get the tired joke. But a ten-minute opening monologue about one character’s transient life through dozens and dozens of New York apartments—apparently the play is Berman’s semi-autobiographical tale of her nomadic urban existence and inability to find a real home—falls flat, with lines about Greek bakeries in Queens and the liberal enclave that is Park Slope making little impact. I lived and worked in Manhattan for five years in the early 2000s—Upper West Side on 76th between Broadway and West End Avenue—and I still quickly found Berman’s real estate recital tedious. If anything, the peripatetic lives of the play’s characters, and their inability to lay down roots, serves as one big obvious metaphor for the homelessness in their heart and inability to connect. Big fucking deal.

As for the rest of the play, it’s mostly a series of small vignettes and quick monologues about unrequited love, relationship baggage and gender politics, which reminds me of a much better play by Ms. Berman, 2003’s “Sam and Lucy,” about unrequited love, relationship baggage and gender politics. But where that play had some real depth and beauty to it, “Hunting and Gathering” is just dull and insipid. The dubious plot twists and turns go on for far too long, and there is absolutely nothing at stake in the many couplings and un-couplings. Still, what else would you expect from a play whose wisest character turns out to be a solipsistic 20-year-old with a subscription to Cosmo, an obsession with the great books of the Western literary canon and a Manhattan therapist?  A 20-year-old, mind you, that acts like a 15-year-old but speaks like a 30-year-old.  You could glean more insight into relationships and female power dynamics in an old rerun of “Sex and the City” than from this play here.

“Hunting and Gathering” would be unwatchable were it not for the play’s four young leads. The diminutive but domineering Paige Collins plays Bess, an alpha female, with just enough vulnerability so as not to render her a completely narcissistic monster. Todd Garcia, so memorable a few seasons back in Dog and Pony’s “Further Adventures of Hedda Gabler,” is a skilled comic actor whose droll sense of humor and killer comic timing reminds me of the film actor Adam Goldberg. Tracey Kaplan, in the unenviable position of having to make Berman’s emotional doormat of a leading lady appealing, pulls it off with a series of priceless facial expressions, at once quirky and endearing, that could give Charlotte from “Sex and the City” a run for her money. And then there’s actor Michael Salinas, who plays a Columbia University English professor. Imbuing his lines with more feeling and emotion than they ultimately deserve, Salinas is an old soul—he’s a boyish-looking actor but his performance looks and feels mature beyond his years—and one skilled enough to deliver platitudes like “I wish I could Mapquest my life” without provoking laughter from the audience.

Berman is a writer capable of better things.  Theatre Seven is a company worthy of better material. (Fabrizio O. Almeida)