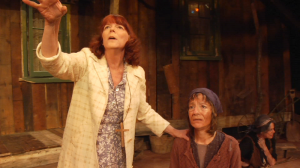 The 1933 play “Tobacco Road” is heavy on the dirt and depression. It’s relentlessly bleak, the occasional gallows humor notwithstanding. And the last fifteen minutes are as grueling to watch as a Greek tragedy. It’s nonetheless so well done in a ferociously relevant and revelatory production by American Blues Theater—the direction, design and acting are very well damn near perfect—that the evening is a triumph and carries with it that rare quality of being an experience at once unbearable and uplifting.

It was adapted in 1933 by playwright Jack Kirkland from the 1932 novel of the same name by Erskine Caldwell, an author with whom I’m unfamiliar, but in his depiction of a feral family facing famine and foreclosure on a worthless piece of land in rural Georgia in the early 1930s, “Tobacco Road” could be a prelude to John Steinbeck’s “The Grapes of Wrath.” Kirkland’s stage version portrays a day in the life of the Lester clan which includes father Jeeter, mother Ada, and teenage children Dude and Ellie May, and director Cecilie Keenan’s pitch-perfect staging—lyrical and quiet when it needs to be, brutal and loud other times—has that beautiful Chekhovian quality of presenting their mundane lives in glorious mundane detail. And when people or events aren’t disrupting the Lester’s lives, the action is mostly static: local lady pastor Sister Bessie Rice trying to marry the underage Dude under the false pretenses of making him a preacher so that she can bed him; Lov Bensey, Jeeter and Ada’s son-in-law, terrorizing the family about his unconsummated marriage to other daughter Pearl; the local landowners coming to evict the family. The cast consume themselves with bits of gorgeous stage business that along with scenic and lighting designer James Leaming’s dilapidated ramshackle of a farmhouse set, evokes a time and a place: Jeeter using a rickety old pole to scratch his back; Dude entertaining himself by throwing an old baseball against the side of the house, the hollow thud sound as grating as it is symbolic of the young man’s monotonous and pointless life; Ellie May picking her toenails as she sits on the dirt road.

Although the play is decades and decades old, you can’t help but imagine that this family might actually exist today. Indeed, minus the iPhones and cable television to distract them, but without jobs to go to, in danger of losing their home in a terrible economy, surrounded by religious hypocrisy, negotiating sexual politics and dealing with everyday family dysfunction, the Lesters seem pretty much like you and me, and that’s the terrifying fact for a modern audience, one that is exacerbated and seared in the mind by this achingly raw and fresh revival. Just try not to feel something as the Lesters devour turnips for a good whole minute on stage, their slurping and chewing noises a reminder of what real poverty and hunger means. Or when a man’s livelihood—his home, his work—is stripped from him in front of his family. Whether it’s happening on a farm in the rural south or a condo in the Gold Coast, displacement is devastating, and an almost 80-year-old play has captured it better than most.

When every actor is as memorable as they are here, it seems almost perverse to single out any cast members, and I could spend paragraphs on each and every one of them. Still, Kate Buddeke as the local pastor woman and Carmen Roman as matriarch Ada lead an ensemble of perfectly integrated and ferociously good acting. Roman, an actress who conveys a good third of her haunting turn in silence and through an understated physical demeanor, nonetheless delivers a cri de coeur performance in the play’s tragic ending without resorting to flashy theatrics. Will someone please give her a “Medea” to headline?

Ultimately, whether or not the public will crave this kind of grueling Senecan experience, especially at the start of what looks to be a gloriously frivolous Chicago summer, is another question entirely. But it would be a shame for anyone who craves visceral theater to miss it. Productions of “Tobacco Road” are extremely rare, and in terms of style and subject matter you’d have to sit through a revival of Robert Schenkkan’s marathon six-hour “The Kentucky Cycle,” or Frank Galati’s three-hour stage adaptation of Steinbeck’s “The Grapes of Wrath” to experience what American Blues Theater is offering here in less than two hours. “Tobacco Road” is epic theater writ small, and in terms of acting, it’s one of the best things on a Chicago stage right now. (Fabrizio O. Almeida)