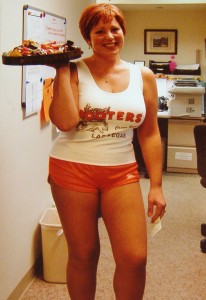 Lisa Pederson's hoot of a Halloween costume, a year after mastectomy

For thirty years, ever since she was a teenager, Lisa Pedersen has been told that she should do comedy. After surviving cancer, she finally decided to give it a shot and started performing at the “Your Sunday Best” open-mic at Schubas.

“I’m trying to spread the word about cancer,” she says. Pedersen wants people to remember that it’s out there but if we remain positive things will get better. “I had a lot of surgeries and pain but I always maintained my sense of humor,” she says.

Starting June 5 at 11pm and running Saturday nights through June 26, Pederson will be performing her one-hour standup-comedy act “Laughing in the Face of Cancer” at Gorilla Tango Theatre, 1919 North Milwaukee. Pedersen plans to donate her proceeds from the $10 tickets to the shows to Imerman Angels, an organization that connects cancer fighters with cancer survivors.

“I expected someone to say that’s inappropriate and wrong but that’s not been the case,” she says of her show. “People who are struggling want to be laughing and enjoying life,” Pedersen says. “Things happen but we have to keep moving forward.”

This is not just a show for cancer survivors: Pederson promises that everybody will be able to appreciate her humor because everyone’s life has been touched by cancer in one way or another.