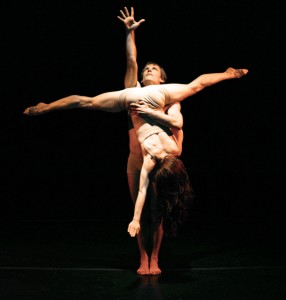 Dmitri Peskov has the intoxicating demeanor of the man who embraces art in all its manifestations. An active poet with a master’s degree in foreign languages and literature and a background in both drama and martial arts, his conversation is delightfully riddled with unassuming references to Beckett, Kurosawa and Brueghel. “Of Fleeting Things,” the first piece for his newly formed company, takes its name from the rejected title of M. Somerset Maugham’s “Of Human Bondage” and explores, in what might be described as novelistic form, the temporality and beauty of human experience.

“The quest for something more is what makes us human,” Peskov muses via phone. “If we suffer we are alive, but people jump to conclusions about my work. I’ve been called angst-ridden, but I think ‘Of Fleeting Things’ is soothing. Suffering is human, but we do more than suffer.”

“Of Fleeting Things” is divided into titled sections—primarily solos and duets—informed by passages from Auden and Beckett. The piece follows two figures, perhaps to be thought of as two sides of a single persona: a meditative, self-reflexive character played by Peskov, whose martial-arts training will come to the fore in the slow-moving, nude solo section entitled “Narcissus,” and an anxious, insecure man danced by the virtuosic Paul Christiano, on whom Peskov set a humorous, tragic, downright stunning solo piece about the genius and madness of Nijinsky last year.

“Paul created much of his own movement,” Peskov says. “We worked in collaboration. There was no need to impose movement or phrase on him.” Peskov worked with his company members individually, creating solos and duets intrinsic to the dancers while structuring the piece to incorporate the unique limitations of Links Hall. In “The Hour of the Wolf,” the darkest section of the piece, the doors at stage right open and close of their own accord while György Ligeti’s eerie minimalist piano score from “Eyes Wide Shut” haunts the background. Humor comes in the duet “Till Death Do Us Part,” and the piece culminates with “Eros,” a reference not only to sexuality, but the Platonic concept of two halves of a complete being in search of one another.

Peskov makes a point of noting that his Russianness is an indelible part of his work. At one point in our conversation he quotes a Russian artist another reviewer once compared him to. “Dostoevsky said, ‘beauty will save the world.’ If there is something of eternity, it is the worship of beauty.” (Sharon Hoyer)