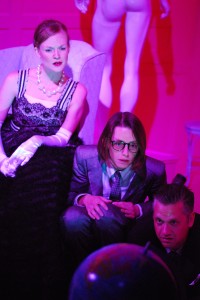 Visual jokes are the smartest aspect of this stylish adaptation of Sartre’s existential classic about three malefactors trapped in a tiny room in hell together for all of eternity—the origin of the famous quote “hell is other people.” In this production, the scariest aspect of hell is its interior designers: the set, an inclined, cramped, shocking pink Schiaparelli-esque nightmare with a giant nude statue and ugly powder-blue furniture (with one comfortable chair the characters fight over) is a perfectly awful place to spend the hereafter. Director Sean Graney handles the story adeptly, and if anything with almost too much vitality; the exquisite claustrophobia that marks the beginning of the production gets dispelled by madcap chaos by the end. As the characters begin to admit why they’re in hell and to work their torture on one another, Graney has them pacing like caged animals, pasting torn-out pages of “Being and Nothingness” on a wall with toothpaste, switching clothes and seducing one another crassly as they destroy the space around them. The action makes the show imminently watchable but results in a frenetic energy that seems less suited to somber Sartre than to farce. Ultimately, it’s a smart, immensely entertaining but psychologically superficial treatment. “I can’t go on without making people suffer,” one character declares; I wish the Hypocrites would let the audience suffer just a little bit of the torture Sartre’s characters go through. (Monica Westin)