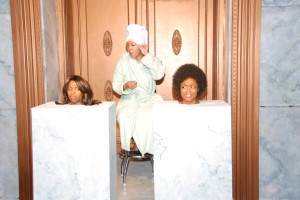 “I’m not what I was ten years ago or ten minutes ago. I’m all of that and then some,” a character proclaims toward the end of “The Colored Museum,” and twenty-four years after its premiere, that thesis holds true. In eleven disparate and seemingly unconnected vignettes, George C. Wolfe’s comedy lampoons various aspects of African-American culture that for better or worse have solidified into positive and negative stereotypes. Congo Square has chosen wisely by appointing Anthony Irons to direct the play, who uses his Second City training to give the play the enegy of a sketch show. Scenes like “The Gospel According to Miss Roj,” about a finger-snapping, alien drag queen, and “The Last Mama-on-the-Couch Play,” which satirizes the great black theater works, will make you laugh, cry and laugh again. And yet, given that so much has happened in black culture and in American culture during the last quarter century, it’s hard not to think of “The Colored Museum” as a museum piece itself. At this point, the play could use a few more exhibits, but those still there are worth a visit. (Neal Ryan Shaw)