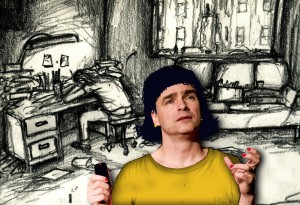 Why curate such an assorted three-part evening? “It’s a simple answer,” according to O’Reilly. “The first show we did at the twentieth-anniversary of Rhino Fest, calling it ’20 Story Animal.’ I wanted to do a bunch of stories from people who had been in the Rhino and some of my own. When people asked if I would do it again the next year, I thought, what’s the second story animal? It ended up being me and a guest. And in introducing the third element this year, I’ve been playing with short adaptations of pieces by famous authors… the gestures of short-story writing and novel writing applied to theater.”

O’Reilly’s three plays include “Tessie at the End of the Hall”: “I was 47 once,” he says, “and it’s a memory piece series of scenes that all happened that year, investigating memory itself”; “The House on the Lake in the Woods by the Ocean,” a modern folktale about a woman who meets a bear after being forgotten in a lakehouse by her husband; and “God Fucking Bless Henry Welles,” a dark comedy about a young man coming from a halfway house to visit an ailing, bedridden friend.

The first three nights will feature a new performance by Chris Sullivan, whose surreal, hypertheatrical solo performance “Mark the Encounter” was my personal highlight at Rhino this year. Sullivan’s new piece,”Aggression Therapy,” continues one of its themes: a satirical but emotive exploration of the therapy industry. According to Sullivan, “’Aggression Therapy’ is much more formal in its language—an oratory experiment, somewhere between the written word and the performed. I like to write things that no one would ever say, but say them anyway.” While the piece centers around a profoundly disturbing theoretical approach to analysis, Sullivan is most interested in “the way that being a caretaker, being in a dominant role in a relationship, eventually undermines you. You can never escape unscathed by any human interaction.”

What does he make of the triple-bill repertory format and the relationship between performances? “I am interested but not worried. It’s like putting two bugs in a jar and seeing what happens.” (Monica Westin)