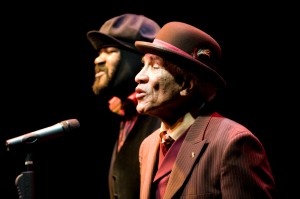 “Low Down Dirty Blues” is the new songbook-style musical revue from Northlight Theatre and it offers everything you’ve come to expect from musical entertainments at Northlight:  great songs, fabulous voices and strong production values. That makes the show worth praising. What makes the show worth experiencing, however, is what you don’t expect to get:  a lot of raunchiness and just enough racial bite.

The actors/singers are Sandra Reaves-Phillips and Felicia P. Fields—the women—and Mississippi Charles Bevel and Gregory Porter—the men. They’re backed by a three-piece blues band and the song list consists of nearly two dozen blues standards. Whether putting you through the emotional wringer with the torchy “Good Morning Heartache” or the plaintive “Grapes of Wrath,” or making you blush with the delicious double-entendre of “My Stove’s In Good Condition” and “If I Can’t Sell It, I’ll Keep Sittin’ On It,” the production breathlessly moves from number to number without bothering to stop and articulate some feeble storyline. Instead, the arrangement of the songs—sometimes to maintain a celebratory mood, sometimes to provide humorous ironic counterpoint, other times for reflection and introspection—provides the evening with its strong emotional arc. When the performers do engage the audience with dialogue, they share anecdotes and conversational bits—culled from the real-life words of the various blues legends that made the numbers famous—that provide a historical context to the evening and imbue the songs with an emotional texture they might otherwise not have had, had they been featured in some antiseptic revolving-song revue. Indeed. There is understandable bitterness from a character who recalls being asked to sing one person’s favorite “blues” song, Jimmy Buffett’s “Margaritaville”(!) Another character talks openly about the refuge that was the blues in light of “working for the white folks, scrubbing floors and washing clothes.” Finally, another character asks, “How did I get over the hill without making it to the top?” The answer, of course, is that racism prevented many of these fine artists from achieving what was rightly theirs. And although director Randal Myler’s production effectively makes this point without alienating his audience or forgetting the reason why everyone has gathered—to listen to the blues and have a great time—its greatest achievement is in staying true to the blues’ roots and yoking that uncomfortable historical reality with the musical art form at hand. 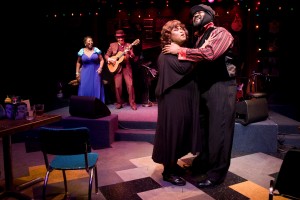 That’s not an easy thing to do. “Black and Blue”, the five-million-dollar song and dance juggernaut entertainment of the blues and jazz, that featured living legends of those art forms including the late Ruth Brown (who brought down the house with her own version of “If I Can’t Sell It…”), was a visually spectacular but emotionally empty experience when I saw it on Broadway in 1989, essentially removing any sense of subversion or melancholy from its otherwise entertaining hit parade of songs. On a fraction of that cost, with four and not four-dozen performers, Northlight’s “Low Down Dirty Blues” has provided the entertainment without sacrificing the emotion. In other words, it’s the authentic Chicago blues experience. (Fabrizio O. Almeida)