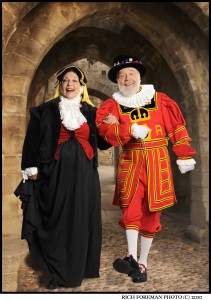 There is perhaps no work in the entire Gilbert & Sullivan catalog quite as peculiar as “The Yeomen of the Guard.” The duo’s only attempt at “serious” operetta, “Yeomen” lacks most of the Victorian barbs associated with G&S and instead attempts to give us a tale of unrequited love set against the England of Henry VIII. The problem, of course, is that G&S knew very little about that time and historical dramaturgy was hardly their strength.

Ironically, despite the work’s supposed seriousness, it happens to have the odd distinction of being the only G&S work with a happy ending, though you would never know that in the Rudy Hogenmiller-directed production of the piece for Light Opera Works, given the way that nomadic jester Jack Point (George Andrew Wolff) is allowed to carry on when he gets the news in the finale that his hoped-for mate is leaving him for her husband. He had his chance to marry her (“I’m a fool,” he states earlier on, “but there is a limit to my folly”), but allowed her to marry a condemned yeoman (Colm Fitzmaurice) for his inheritance, but the yeoman, of course, escapes, with the help of an admirer of his who seduces the jailor.

If none of this seems very plausible, not to worry. Arthur Sullivan had been fed up with the triteness of Gilbert’s plots and the dominance of his words in their works, and so really poured himself into this more serious plot with some of his best music, which is delightfully well served here by a twenty-nine-piece orchestra under Roger L. Bingaman. Despite a bit too much vibrato here and there and the usual LOW over-amplification issues, the singing, too, is by and large consistent, with Alex Honzen as the jailor really standing out both for his droll comic timing and booming baritone.  (Dennis Polkow)