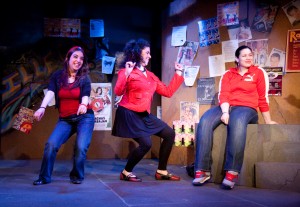 Teatro Luna shows have always been a sweet yet satisfying soufflé of light comic sketches, penetrating monologues and jubilant musical and choreographic sequences. The long-standing core company of writer/creator/performers was one of the best ensembles I had ever had the privilege of watching: pint-sized spitfire Belinda Cervantes; sultry Yadira Correa, who could effortlessly squeeze sexual suggestiveness out of any line and who commanded the stage with her Amazonian stature; Miranda Gonzalez, another sexy Latina bombshell whose braininess also made her the thinking man’s Sonia Braga; Suzette Mayobre, the prim and proper light-skinned Latina with no accent who could play all of the “she isn’t Latina, is she?” parts and who took over that role once inhabited by original co-artistic director Coya Paz; Tanya Saracho, original co-artistic director, the brains behind the beauty, and the Luna who most turned her struggles with weight and body image issues into some of the group’s best dramatic material; and Maritza Cervantes, who smartly exploited her plus-sized panache and booming voice to great comic and sometimes heartbreaking effect.

The new crop of ladies in “Generic Latina 2010,” a few of whom betrayed their limited stage experience on opening night, took some time getting used to, mostly because they initially seemed like imitations of the original types. Maria Ortiz, bearing an uncanny resemblance to Sofia Coppola, was the obvious replacement for the short, spitfire Luna. Marilyn Camacho, with her gorgeous Latina fro and killer sex appeal, was the new Yadira Correa. Lauren Villegas, an actress with impeccable comic timing, a big vocal instrument and big stage presence, took all the “butch” parts once played by Maritza Cervantes. Jessi Perez was another zaftig beauty who, like Saracho before her, could get down to the music. Fair-skinned, no-accent Andrea Morales, who physically reminded me of a more ethnic Andie MacDowell, had the beauty and the brains to inherit the Miranda Gonzalez slot, and natural comedienne Marie Antoinette Flores, who almost single-handedly stole “Jarred” with her great comic performance, was the one who brought a different look to the group.

By the end of the evening, I can honestly say that despite the bias for the old guard with which I entered into the evening, this new sextet of ladies ultimately erased memories of their predecessors and earned the right to inherit the title of Lunas. Camacho creates one of the most memorable Luna characters ever with her tell-it-like-it-is Eva, part of a trio of mature and wisecracking señoras (think a Spanglish “Sex and the City” meets “The Golden Girls”) called “Las Comadres” that is certain to remain a Luna staple. She can also rap like her life depended on it. Ortiz brings the house down with some golden one-liners and makes us think in a timely piece about exploited nannies. Villegas shows range in a comic sketch as a butch lesbian, and through a meaty monologue about identity and the meaning of a name. Morales has the physical look to pull off two pieces from the perspective of a Brazilian woman, a voice and point of view seldom heard in past Luna pieces but terribly overdue. Antoinette Flores shows that she’s more than just a funny face by executing a memorable monologue on the Hispanic experience in the white suburbs of Chicago and internalized racism. And like a solid character actress, Perez disappears into the piece’s other multitude of roles or sketches. 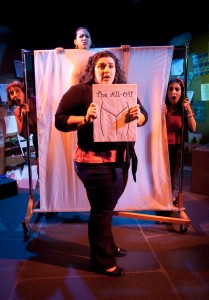 “While there’s nothing that musically or choreographically comes close to past large set pieces such as “How the Modern Girl Deals,” “Proper Latin Girl” or “Good Girl/Bad Girl,” there’s more experimentation—some successful, some not—with musical forms and staging techniques.  Gonzalez, who developed and molded the material and takes on directorial duties for the first time, struggles to maintain a consistent unifying tone to the entire evening; she’s concentrated her nascent directorial talents on making each vignette polished and its own insular experience, a good thing for sure. But the pleasant lightness to past Luna productions, as well as its ability to be political without feeling preachy, is oftentimes missing. The piece could also afford to lose about twenty minutes.

But these are nitpicky items as the real event here was the introduction of the new Lunas as well as the promise, fully realized on opening night, that these ladies could keep Teatro Luna relevant and compulsively watchable as it enters its new decade. (Fabrizio O. Almeida)