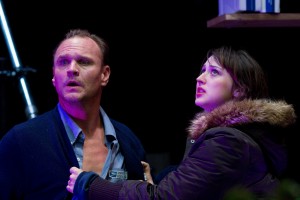 Dog & Pony’s “Dead Letter Office” is a slow burn. Christian has been the sole staff member of the Department of Lost Letters in a Twin Cities post office, with the daily interruption of cloying coworker Agatha the only break from his well-worn monotony. Until, that is, young Je T’aime walks in, carrying a serious amount of baggage for all her twenty-two years. Stuck between the boss she’s sleeping with for her job and Christian, her supervisor, who used to be a boxer like her dad, Je T’aime has one killer secret.

With the exception of Agatha, a loony Midwestern stereotype, the play’s character development is sumptuous and heartbreaking. Especially moving is Joshua Volkers’ Rolo, who gives more complexity than you’d expect to a character with that name. And yet the ambitions toward a seeming indictment of traditional communication systems, supernatural figurations and Shepardian psychology leave you more than a little nonplussed. Things go more than a bit haywire in the final moments, creating an incomprehensible knot from disparate threads. If the ingenious production design is any indication, however, the beauty of the show’s ambitious juggling act isn’t in the ta-da moment, but in the inevitable tumbling down. (Neal Ryan Shaw)