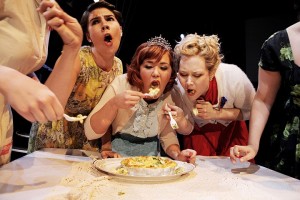 There are many similarities between “Sketchbook” and IML, the International Mr. Leather celebration.

“Sketchbook” is, of course, Collaboraction’s annual festival of mixed-media theater, music and performance art, a Chicago-flavored and smaller version of the Edinburgh or New York Fringe Festivals. IML is one of the biggest gatherings of leather, fetish and kink lovers from around the world, also a Windy City tradition. “Sketchbook” is celebrating its tenth anniversary in style and has taken over the upstairs theater and lobby of the Chopin Theatre for the next three weeks. IML just celebrated its thirty-second subversive year and commandeered the entire Hyatt Regency Hotel this past Memorial Day weekend. Both events are a peculiar mix of sexy, strange, funny, clever, physically mind-boggling, gross-out and consistently surprising entertainment gathered under one roof. Some sequences are painfully long and awkward to watch:  at IML they involve whips and chains; at Sketchbook it’s the cumbersome and time-draining scene changes. The smell of beer permeates the air at both events, indeed, both experiences become exponentially better the more inebriated you become (for the record, this critic never drinks on the job). There’s a lot of techno and trance music blaring at both events (I’ll be forever thankful to Sketchbook for bringing to my attention a wicked good house version of Chris Isaak’s “Wicked Game”).  At both Sketchbook and IML, you’re guaranteed to see things you have never seen before, things you will never see again, and things you hope you never see again. There’s tons of experimentation although the creativity at IML could get you arrested and thrown in jail in some states while at Sketchbook it wins you an NEA grant. You can see people make incredible fools out of themselves at both:  at IML the performers do it for sexual kicks; at Sketchbook they do it for artistic fulfillment. At both, there are some things that make no sense brilliantly; there are some things that just make no sense. Sketchbook has better lighting. IML has better men. Both are terrifically entertaining. Both have moments that are terribly boring. 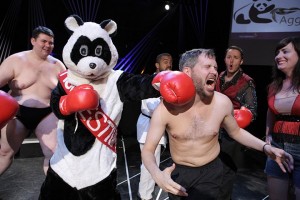 John Wilson (center) getting punched in "The Ring" by Greg Hardigan/Photo: Saverio Truglia

For five hours on “Sketchbook”‘s opening night, critics took in the entire program of nineteen original works—each about ten minutes in length—that will play in repertoire throughout the run. Each performance will stream live on Collaboraction’s web site (collaboraction.org). Huge video monitors in the windows of the Chopin will mean that onlookers can stop and watch what’s happening in the belly of the theater (let’s hope they won’t be driving a car while they’re doing it). And various musical artists throughout the run will DJ each performance, making those scene changes somewhat bearable and imbue Sketchbook with that Ibiza-house party feel it has to it, as if a Chicago storefront theater festival had been plopped dead smack in the middle of Carnival in Rio. Since this type of event defies any act of criticism, rendering even the best critic a glorified reporter at best, future Sketchbooks would do far better filling up the press list with society-page writers, nightlife columnists and world music and modern art critics (the evening sometimes has the feel of a glow-in-the-dark art installation piece).  Because ultimately Sketchbook, like IML, is about seeing and being seen. It’s not so much about the product as it is about the excuse to throw one big multimedia party, a community of like-minded individuals and their admirers coming together, getting off (at IML, literally) and celebrating their love of the art form at hand.

That’s my two cents. But in case you’re interested, the following addendum is intended as artist feedback and for those who may want this critic’s opening-night impression of each of the nineteen of the festival’s pieces, synopsis and video samples of which can be found on Collaboraction’s web site. In no particular order:

“Astronomy for Beginners”: Tries but fails beautifully to be the dramatic love child of Nora Ephron and Tom Stoppard. Blessed with a brilliant trio of instantly likable performers.

“The Blueberry”: When Sean Graney (here acting as playwright) gets sentimental, he gets really sentimental. A sweet and whimsical piece of diarrhea-of-the-brain writing with a lovely and brainy performance by Celeste Januszewski. 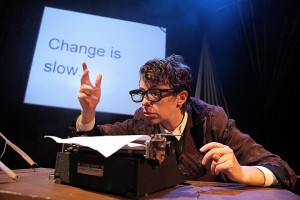 Jessica Hudson in "Spider in the Attic”/Photo: Saverio Truglia

“Eighty-Four”: All I remember is the set, which should tell you something.

“Magillicutty’s”: Take a vintage Joe Pintauro one-act about the impossibility of male-female unions, give each character the kind of internal and stream-of-consciousness monologues that Yasmina Reza produced for her characters in “The Unexpected Man,” and appropriate the snappy and profane-laced dialogue of Daniel Therriault. Too bad its best monologue was spoken by actor Ryan Patrick Dolan, whose vocal timbre was grating, who lacked enunciation, had no sense of phrasing and didn’t seem comfortable on the stage.

“Play (by play by play…)”: If imitation is the best form of flattery, then the Beckett estate should be flattered. Based on Becket’s “Play.”

“The Ring”: Finally, someone produces a terrific Second City-quality sketch about those asinine ads that make taking a life-altering drug seem as sunny an experience as a Sunday-school picnic. “At fifteen minutes, however, it’s ten minutes too long.” And when is wrestling between two semi-naked men not homoerotic? When the men involved are as out of shape, pasty-skinned, man-boobed and un-sexy as they are here.

“Tight Curls Today”: Sentimental. Feminist. And utterly predictable. “The Heidi Chronicles” set in a beauty parlor or the kind of nascent play writer Tina Howe would have drafted when she was a student at Sarah Lawrence.

“Yetsi’at Metzrayim”: This irreverent piece of writing exploits Jews, the “Joseph and the Amazing Technicolor Dreamcoat” soundtrack and Chinese dumplings to hilarious effect. And I’ll never look at cucumbers in the same way again. 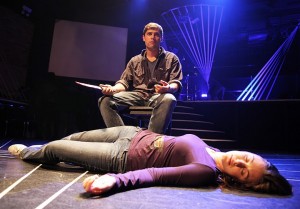 “What I’m Looking For”: Hard to judge this histrionic musical number out of context from the rest of the (I assume) song cycle. A jealous and philandering boyfriend kills his girlfriend who’s about to walk out on him.  She returns from the dead to duet with him on a bring-down-the-house musical-theater pop ballad, and they’re joined by the ghosts of half a dozen other men and women and their deceased (from a violent crime of passion) partners. I wasn’t impressed by the number, I couldn’t hear the lyrics, but not since Jason Robert Brown’s “Parade” have I witnessed the glorious dichotomy that is soaring music spewing from the mouths of horrible human beings.

“Five Lesbians Eating a Quiche”: If Joe Eszterhas and Andrea Dworkin had been forced at gunpoint to collaborate on something they might have come up with this guiltiest of pleasures. A piece that shamelessly panders to straight-male lesbian fantasies and an unabashed shout-out to Sapphic sisterhood. Go figure. I wish I knew her name, but the female actress who looks and sounds like a young Roseanne Barr steals the show.

“Four Women”: Modern-dance and musical piece with African-American rhythms showcases some spectacular Afro-Caribbean moves and big voices, not to mention brings cultural and artistic diversity to the evening.

“The One About The Whale”: A pastiche of Gilbert and Sullivan with poperatic overtones. “The Mikado” meets “The Little Mermaid.” But could I take two hours of this?

“The Saint and The Imp”: Painfully bad, and for a very noticeable seven minutes, the energy in the Chopin hits an all-time low.

“Spider in the Attic”: The insect-like physical dexterity of Jessica Hudson’s performance reminds me of seeing Mikhail Baryshnikov in Steven Berkoff’s “Metamorphosis” on Broadway.  Hudson’s piece is just as disturbing and emotional as Berkoff’s take on Kafka’s short story was.

“When I Was…”: Children dancing and acting like adults on stage are the performance equivalent of puppies:  cute, ingratiating and quickly overbearing. Just like this piece of writing.

“You Enjoy Myself”: Sample line:  “When the monkey saw the ice cream his brain cells fired.” I last heard, and laughed at, this kind of writing in a black-box studio theater on a college campus during a Performance Art 101 seminar. Boring and pretentious, no wonder it was the first piece of the evening.  Better to forget it ever happened at all. (Fabrizio O. Almeida)

Good luck with your Karma Fabrizio…your gonna need it.

wow. what a dick. you even found a way to insult a youth ensemble. I think its time Chicago theatres stop offering free tickets to “critics” like this joke.

Ha! This reviewer actually has the stones to call someone *else* pretentious at the end of this name-dropping, self-serious hatchet job? Mr. Kettle, I believe there’s a pot that wishes to speak with you.

Shouldn’t respond to this since I think your “job” as a reviewer is quite worthless (FTR-I have nothing to do w/Sketchbook or Collaboraction)…So is your “job” to review or try and be clever?…And wtf w/commenting on people’s body types?…Does that have one iota to do w/the quality of the shows?…This kind of bullshit may have flown in your high school newspaper, but this is Chicago theatre…We’re smart and don’t suffer fools (or jerk-offs) gladly. New City-Don’t bother sending this negative/pretentious douchebag to “review” any of my company’s shows…At least you still have Monica Weston-she’s seems to have a clue. My… Read more »