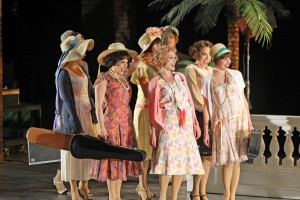 Following hugely successful Broadway efforts such as “Gypsy” and “Funny Girl, ” Jule Styne set the Billy Wilder film “Some Like It Hot” to music in a show called “Sugar.” Part of the reason that “Sugar” did not have the success of those earlier shows is that it was unable to secure the rights to the title of the film though, curiously, that has happened twice since: when Tommy Tune did a production on London’s West End and when an elderly Tony Curtis toured with it—including a stop in Chicago—nearly a decade ago (he played the Joe E. Ross character), “Sugar” was redubbed in both cases “Some Like It Hot.”

Whatever you call it, “Sugar” is basically “Some Like It Hot: The Musical,” and that is how director and choreographer Jim Corti has decided to stage it for his Drury Lane Oakbrook production; Corti has the story unfold on a mock soundstage complete with movie spotlights and prop-moving crew members in stenciled jumpsuits (thank goodness, no bulky cameras). It should be said that while this is a distracting element at first, every other aspect of this production is so well-served that the movie trappings can be easily disregarded.

Yes, some of the score’s best moments have been cut—including the finale—and reordered, and a song cut from the show, “The People in My Life,” is made the eleven o’clock number here, as had been done for the Curtis tour.  Much of the dialogue has also been cut to have it conform more closely to the movie script and the romantic aspects of the original show have been minimized. Corti wisely recognizes that this is a comedy, not a romance, and stages it as such, with the laughs fast and furious.

But the best part of this production is how original the portrayals actually are, refusing to fall into the trap of doing the usual caricatures of the movie roles that productions of this show usually fall into. Not only does Rod Thomas never resort to a Tony Curtis imitation, but even better, he never takes up Tony Curtis sending up Cary Grant in his portrayal of Junior. Likewise, Jennifer Knox makes no attempt to give us Marilyn Monroe’s whispery whimsy, but creates a more confident Sugar Kane that is all her own, at times almost suggesting what Drew Barrymore might be like in the role. Only Alan Schmuckler gives us a hint of Jack Lemmon in his portrayal, but not distractingly so, though the most original of the bunch is veteran actor Joe D. Lauck’s performance as Osgood Fielding Jr., which bears no resemblance whatsoever to comedian Joe E. Ross’ movie portrayal. Lauck plays the elderly yet sexually frisky millionaire quite suavely which, of course, makes all of the comedy surrounding his romance with his would be “wife” all the more hysterical. His rendition and surrounding chorus of cane-wielding dirty old men, while the score lampoons Kurt Weill’s “September Song” with an even more elderly “November Song,” nearly steals the show.  (Dennis Polkow)