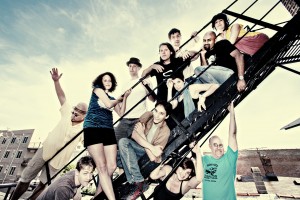 This summer, the Neo-Futurists will once again produce their annual staged-reading series of terrible films. This year, “Film Fest IX: The Perils of the Neo-Futurarium,” was put together by Bilal Dardai and Megan Mercier.

“We try not to engage in any overt mockery but really just to show the script for what it is,” Dardai says, explaining that he doesn’t want the performance to be trying too hard but rather just to expose the humor that already exists within the script.

“The fact that it’s the ninth year is a testament to the festival’s success,” he says. “We never just perform the movie verbatim; the point is what we can do with it on stage.”

Dardai and Mercier work together to pick the best ideas to make the festival a success, sifting through ideas collected during the winter. Some of the performers have been doing this festival for years while others are brand-new to this event. “We both want to have a festival that is a mix of first-timers and veterans.”

The films range from different eras and a variety of genres. “We get a lot of films that are from the eighties and nineties but we also like to get them from the forties,” Dardai says. “We have done serious films, usually where the movie took itself seriously and that’s why it’s so funny.”

Dardai is excited about this summer’s offerings, especially “looking forward to “The Apple,” [July 8] which is a 1980s disco opera filled with biblical stories filmed in West Germany but supposed to take place in Canada.”

The staged readings this summer include “Supergirl” (1984) on July 1, “The Apple” (1980) on July 8, “Billy Jack” (1971) on July 15, “Brain Damage” (1988) on July 22, “The Saga of the Viking Women and Their Voyage to the Waters of the Great Sea Serpent (as Performed by the Inmates of the Asylum of Charenton Under the Direction of the Great Sea Serpent) Featuring Robot Vs. Dinosaur” (1957) on July 29. The closing performance will be “My Little Pony: The Movie” (1986) on August 5, which will be co-directed by Rachel Claff, the creator of this film fest nine years ago. (Ashley Abramowicz)

At The Neo-Futurarium, 5153 North Ashland, Thursdays at 8pm, July 1 through August 5. $10, $8 for students with ID and repeat customers. www.neofuturists.org.