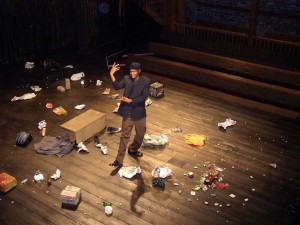 There are so many one-person shows out there that many of us have become numb to the template of one person sharing anecdotes for an hour or two, or even acting his or her heart out in an intense manner for a compact period of time. What distinguishes “Itsoseng” from the usual formulaic solo fare is that it is a sweeping dramatic epic that just happens to be told by a single person. That said, the single person in this case actually takes on the personas of the various characters in the play, sometimes right within the same scene (yes, we’ve seen that before, too) that just happens to be set within the immensely compelling backdrop of South Africa’s post-apartheid era. We have seen that before, too, right here in our country: simply because civil rights legislation is passed or a black man becomes president in America does not mean that racial prejudice goes out the window, and in fact, for some, such events become rallying cries for agendas of white privilege to simply take on new forms.

Similarly, just because Nelson Mandela was released from jail and became president of South Africa, the official end of apartheid may have signaled the end of one period of racial repression, for sure, but also the beginning of another. Simply because racism is no longer explicitly legal hardly means that it disappears, and “Itsoseng” gives us the inner workings of what it might be like for an indigenous African to attempt to live one’s life in the midst of hopes dashed with practical realities of the remnants of colonial power still implicitly calling the shots every step of the way.

One of the remarkable aspects of “Itsoseng,” a reference to one of South Africa’s all-black townships, is that this is not only a story that actor and playwright Omphile Molusi wrote and acts out, it is a story that he lived, and that he relives, every time that this play is performed. That gives “Itsoseng” an authenticity and integrity that informs every aspect of the experience. Lest this sound like a downer, the range of emotions expressed here and the optimism of spirit that shines through is part of what makes this such a remarkable journey. And the ease with which Molusi moves from pure physical comedy to the depths of a soul in torment is not soon to be forgotten. (Dennis Polkow)