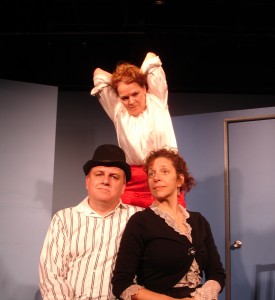 Kinda schlocky. Kinda brilliant. Totally fun. That’s “40 Whacks, ” the new show from the Annoyance Theatre.  It’s based upon the infamous Lizzie Borden murder case and trial from the late nineteenth century, and this original work, by writer Aggie Hewitt and director Irene Marquette, with musical direction by Lisa McQueen, appropriates something between a melodramatic play and an old-fashioned musical, between the “dark comedy” that the folks at the Annoyance are calling it, and an improvisational romp for which the Annoyance (I think) is known (“40 Whacks” is the first show I’ve seen by this company).

On opening night, Hewitt and Marquette took the stage to deliver the customary thank-yous to collaborators and supporters. What struck me, however, was how charming, down-to-earth and genuinely grateful these artists seemed, the kind of young ladies with whom you could see yourself sharing a drink and a devilishly good and smart conversation. It’s that sense of fun, accessibility and beguilement that allows “40 Whacks” to be so good in spite of itself. Because as a play, the story is perfunctory at best; I don’t think I walked out knowing anything more about Lizzie Borden than I did walking in, something that had been limited to the catchy rhyme, “Lizzie Borden had an axe/And gave her mother forty whacks/When she saw what she had done/She gave her father forty-one.”  There’s an underdeveloped romantic subplot involving Lizzie’s uncle and an Irish maid. And the second act court sequence is less about the actual Lizzie Borden case than it is any famous person who has ever stood trial and walked free thanks to celebrity razzmatazz, media distortion and courtroom theatrics.

As a musical, there’s a smart number that gives some historical flavor to the piece (“It’s Great To Be Men in the 1890s”) but does little else for the musical as a whole. One of the most entertaining numbers, a 1970s easy-listening piece of glorious schmaltz with wicked 1980s programmed drums, is given to a secondary character, Lizzie’s stepmother (which comedienne Jennifer Estlin nonetheless transforms into a histrionic solo of Celine Dion epic proportion). And Lizzie’s only memorable number (“This is the Second Floor of the Borden House”) is not a strong character-defining ballad but instead a clever tongue-twister-of-a-patter song with accelerating tempo that brings to mind “Getting Married Today” from “Company.” Like most of McQueen’s songs, it appeals to the brain more than it does the ears, something that’s exacerbated by the fact that nobody in the cast can really sing, not that this “musical comedy” would be as much fun if it were sung by professional singers. Indeed, the lack of natural singing ability, the spoken rather than sung approach to some of the numbers, the lack of singers’ pitch, the fact that the music only really sounds good when multiple voices blend and compensate for one another, is part of the show’s musically sloppy charm, imbuing it with the same spirit that makes good-bad karaoke so much fun to watch.

Somehow, though, everything comes together. McQueen maintains just the right light comic tone throughout, despite the strange mix of macabre subject matter, tongue-in-cheek acting and good-to-just-okay singing. In the title role, Ellen Stoneking gives a complex and hysterically dark comic performance. With a sweetly sadistic gravitas, and playing a character facing the same demons all ladies past a certain age still living at home must face, Stoneking is as brilliant with this material as Amy Sedaris was with “Strangers with Candy.” As her father, actor Noah Gregoropolous, with his strapping presence, silver white/blond tousled locks, blue eyes and New England “Paaark the caaar and go to Haarvard” accent, is the late Ted Kennedy reincarnate and commands countless guffaws from just speaking his lines. Cristin McAlister does a nice job playing both Lizzie’s unhappy and constantly bitching sister and a Fosse-slinking defense attorney (a courtroom sequence is clearly a musical and visual nod to Kander and Ebb’s 1975 “Chicago”).  And the rest of the cast, Chelsea Farmer, Mike Matlz and Sherman Edwards all have their moments.  McQueen’s underscoring for the book scenes provides some terrific and haunting atmosphere for the piece, and the highest compliment I can give her score—quirky here, pastichey there, complex and colorful—is that it’s the kind of musical score that Sufjan Stevens might have written. (Fabrizio O. Almeida)