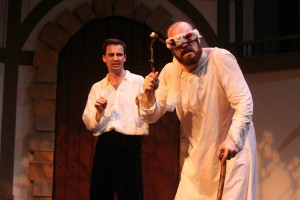 Much like the bit in Reduced Shakespeare’s “Complete Works” that combines all of the Bard’s comedies into one gigantic super-comedy, “Shakespeare’s King Phycus” is a pithy mash-up of the more memorable Tragedies. In this hilarious parody, Hamlet and Juliet are siblings, the former married to the Scottish Macbetty, the latter betrothed to the deformed Gloucester by their father the great King Phycus, whose Queen, Gertrude, has recently been murthered.  Meanwhile, incongruously, Brutus is an Italian ambassador and Romeo a Roman spy. If this seems like a lot to handle, it is—and that’s not even all of it. Yet the ingenuity of Tom Willmorth’s script is well matched by an ensemble of energetic performers and increasingly clever staging by director Ira Amyx. The play’s jabs at Shakespeare and contemporary stage practice (their “authentic” Old Globe set totally misses the mark; Goldenberg and Rosensteen are bad improv performers) are right on the money, but standard Clinton jokes and “Matrix” fights are a bit tired for pop-culture references. Miraculously, the plot somehow comes together, despite its many comedic detours.  Although it does end with a bunch of dead bodies onstage, “Shakespeare’s King Phycus” is no tragedy. (Neal Ryan Shaw)