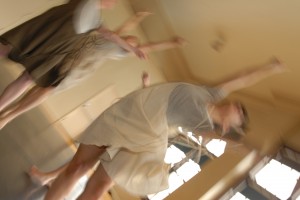 In her latest experiment, artistic director Michelle Kranicke manipulates the elements of proximity and attention span, allowing audience members to position themselves on the periphery or at the center of the Epiphany Church stage, and reminding us that perspective—and subjectivity in general—are potent players in the watching and, consequently, creation of dance. Kranicke was inspired by artist Brice Marden’s search for the perfect color via painting and repainting the same canvas—a practice she inverts by attempting to strip away the components of dance performance. It will be interesting to see what is revealed by the blank canvas, particularly for those with the guts to sit in the middle of the action (or inaction or potential action, alternately). The program also includes a new trio by associate AD Emily Stein, concerned with the complex relationship between the performer and the audience. The title, Kranicke says, was chosen for its implication of intent: looking is far more participatory than seeing. Check out this show; it’s all about you. (Sharon Hoyer)